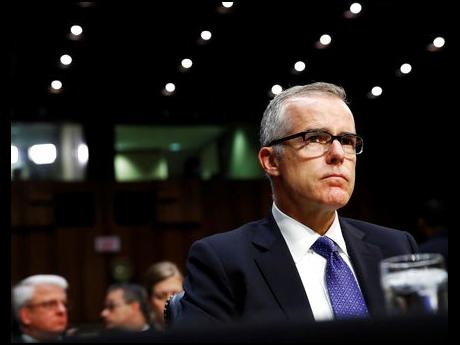 McCabe ... I can tell you also that Director Comey enjoyed broad support within the FBI and still does to this day.

Since President Donald Trump's surprise ouster of Comey on Tuesday, the White House has sought to justify his decision, in part, by saying that the director had lost the confidence of the rank and file of the FBI as well as the public in general.

"That is not accurate," McCabe said in a response to a senator's question about the White House assertions.

"I can tell you also that Director Comey enjoyed broad support within the FBI and still does to this day."

The firing of Comey left uncertain the fate of the FBI's probe into Russia's election meddling and possible ties to the Trump campaign. The investigation has shadowed Trump from the outset of his presidency, though he's denied any ties to Russia or knowledge of any campaign coordination with Moscow.

McCabe called the investigation "highly significant" — another contradiction of the White House portrayal — an sought to assure senators that Comey's firing will not hinder it.

He promised senators he would tolerate no interference from the White House and would not provide the administration with updates on its progress.

"You cannot stop the men and women of the FBI from doing the right thing," he declared.

He said there has been no interference so far.

Trump, in a letter to Comey dated Tuesday, contended that the director had told him "three times" that he was not personally under investigation.

McCabe said it is not standard FBI practice to tell someone he or she is or isn't under investigation.

The White House refused Wednesday to provide any evidence or greater detail.

Former FBI agents said such a statement by the director would be all but unthinkable. McCabe told senators he could not comment on conversations between Comey and the president.

Days before he was fired, Comey requested more resources to pursue his investigation, U.S. officials have said, fuelling concerns that Trump was trying to undermine a probe that could threaten his presidency.

McCabe said he was not aware of any such request and said the Russia investigation is adequately resourced.

It was unclear whether word of the Comey request, put to Deputy Attorney General Rod Rosenstein, ever made its way to Trump.

But the revelation intensified the pressure on the White House from both political parties to explain the motives behind Comey's stunning ouster.

Trump is the first president since Richard Nixon to fire a law enforcement official overseeing an investigation with ties to the White House.

Democrats quickly accused Trump of using Comey's handling of the Hillary Clinton email investigation as a pretext and called for a special prosecutor into the Russia probe. Republican leaders brushed off the idea as unnecessary.