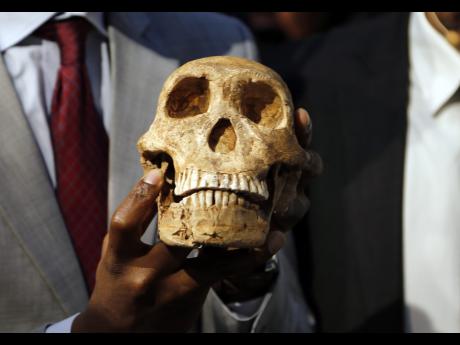 AP
A replica skull of a species belonging to the human family tree whose remnants were first discovered in a South African cave in 2013 is held at the unveiling at the Maropeng Museum, near Magaliesburg, South Africa, on Tuesday.

A species belonging to the human family tree, whose remnants were first discovered in a South African cave in 2013 lived several hundred thousand years ago, indicating that the creature was alive at the same time as early humans in Africa, scientists said Tuesday.

A meticulous dating process showed that Homo naledi (nah-LEH-dee), which had a mix of human-like and more primitive characteristics such as a small brain, existed in a surprisingly recent period in paleontological terms, said Lee Berger of Wits University in Johannesburg. Berger led the team of researchers, which also announced that it had found a second cave with more fossils of the Homo naledi species, including a relatively well-preserved skull of an adult male.

The conclusion that Homo naledi was living between 236,000 and 335,000 years ago and had not become extinct much earlier shows that the human 'Homo' family tree was more diverse than previously thought at that point in the evolution of our species, Homo sapiens, said John Hawks of the University of Wisconsin-Madison and Wits University.

The next step in research is to "sort the relationship of these different species to each other and also their role in our process of becoming human," Hawks said during an announcement of the discoveries at the Cradle of Humankind, a site near the South African town of Magaliesburg where the fossils were found. The research was also published in the journal eLife.