US may send Patriot missile to Lithuania amid Moscow threat 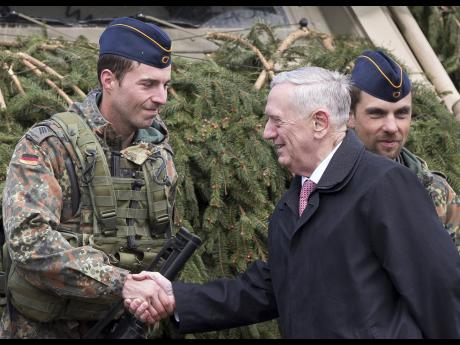 AP
US Secretary of Defence James Mattis (right) greets soldiers of the Germany's Army at the Training Range in Pabrade, some 60km.(38 miles) north of the capital Vilnius, Lithuania, yesterday.

US defence officials said a long-range Patriot missile battery may be deployed to the Baltic region later this year as part of a military exercise. The move, if finalised, would be temporary but signal staunch US backing for Baltic nations concerned about the threat from Russia.

US Defence Secretary Jim Mattis yesterday declined to confirm the specific deployment, but said, "We are here in a purely defensive stance. Everyone knows this is not an offensive capability. For anyone who says otherwise, I would just say I have too much respect for the Russian army to think that they actually believe there's any offensive capability."

At a news conference with Lithuania President Dalia Grybauskaite, Mattis said the US "will deploy only defensive systems to make certain that sovereignty is respected. The specific systems that we bring are those that we determine necessary."

Asked about a potential Patriot deployment, Grybauskaite would only say that "we need all necessary means for defence and for deterrence, and that's what we will decide together".

US officials said the Patriot surface-to-air missile system could move into the region during the July air defence exercise, but it would be gone by the time a large Russian military exercise begins in August and September.