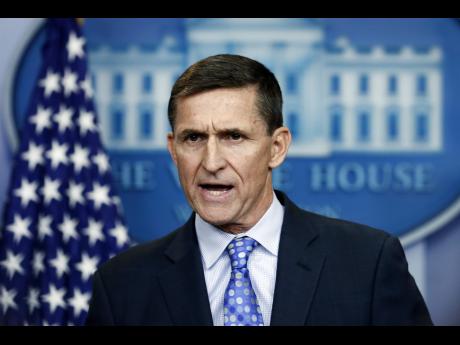 AP
In this February 1, file photo, then-National Security Adviser Michael Flynn speaks during the daily news briefing at the White House, in Washington.

Senator Richard Burr, the Republican chairman, and Senator Mark Warner, the committee's Democratic vice-chairman, issued a joint statement saying the panel decided to issue the subpoena after Flynn, through his lawyer, declined to cooperate with an April 28 request to turn over the documents.

Flynn and other associates of President Donald Trump have received similar requests from the committee for information and documents over the past few weeks.

Copies of request letters sent to long-time Trump associate Roger Stone and former Trump foreign policy adviser Carter Page were shared with the Associated Press. Those letters, which were nearly identical, sought emails, text messages, letters, phone records or any other relevant information they have about meetings or contacts that they or any other individual affiliated with the Trump campaign had with Russian officials or representatives of Russian business interests. They also ask for information about any financial or real estate holdings related to Russia, including any since divested or sold.

Stone, Page, Flynn and former Trump campaign chairman Paul Manafort all received similar requests for information, a person familiar with the Senate investigation said. That person spoke on the condition of anonymity to discuss the details of the committee's investigation.

The requests sent to Stone and Page covered documents and information from June 2015 through January 20 of this year. During that period, Flynn accepted tens of thousands of dollars from a Russian state-sponsored television network. He later worked as a foreign agent on behalf of a Turkish businessman, while serving as a top Trump campaign adviser. It also covers the post-election time period in which Trump and his transition team decided to appoint Flynn as national security adviser.

Flynn was fired by Trump after less than one month on the job. The White House said Flynn misled Vice-President Mike Pence and other top officials about his communications during the presidential transition with Russia's ambassador to the United States.