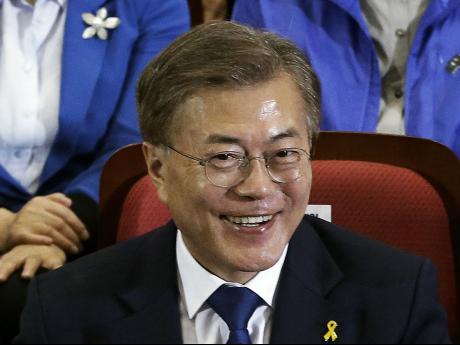 Just five days after South Korea elected a president who expressed a desire to reach out to North Korea, Pyongyang sent a challenge to its rival's new leader on Sunday by test-firing a ballistic missile.

The missile flew for half an hour and reached an unusually high altitude before landing in the Sea of Japan, the South Korean, Japanese and United States militaries said. Tokyo said the flight pattern could indicate a new type of missile.

The launch jeopardises new South Korean President Moon Jae-in's willingness for dialogue with the North, and came as US, Japanese and European navies gather for joint war games in the Pacific.

"The president expressed deep regret over the fact that this reckless provocation ... occurred just days after a new government was launched in South Korea," senior presidential secretary Yoon Young-chan said.

"The president said we are leaving open the possibility of dialogue with North Korea, but we should sternly deal with a provocation to prevent North Korea from miscalculating."

WILLING TO VISIT THE NORTH

Moon, South Korea's first liberal leader in nearly a decade, said as he took his oath of office last week that he'd be willing to visit the North if the circumstances were right.

President Donald Trump has also said he'd be "honoured" to talk with leader Kim Jong Un under favourable conditions. But on Sunday, the Trump administration seemed to throw cold water on the idea of talks with North Korea.

"Having a missile test is not the way to sit down with the president, because he's absolutely not going to do it," Nikki Haley, the US ambassador to the United Nations, told ABC's 'This Week'.

She said it was time to "send a strong, unified message that this is unacceptable, and I think you'll see the international community do that."

While it wasn't immediately clear what type of missile was launched, the US Pacific Command said that "the flight is not consistent with an intercontinental ballistic missile."

North Korea's past satellite rocket launches have been called clandestine tests of ICBM technology, but it is not believed to have tested a true intercontinental ballistic missile yet.

Japanese officials said the missile flew for about 30 minutes, travelling about 800 kilometers (500 miles) and reaching an unusually high altitude of 2,000 kilometers (1,240 miles).