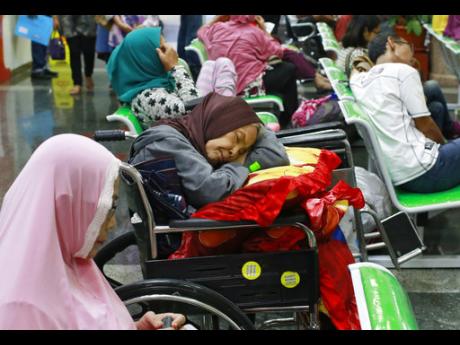 AP
A patient takes a nap in her wheelchair as she waits with others at the registration desk at Dharmais Cancer Hospital in Jakarta, Indonesia, yesterday as the hospital’s information system is in trouble from cyberattack.

The latest on the global extortion cyberattack that hit dozens of countries:

Investigators looking to catch the perpetrators of the global "ransomware" attack will be looking for digital clues, including monitoring the bitcoin accounts used to collect ransom payments.

It'll be tough, but not impossible.

The cyberattack that emerged on Friday has paralysed computers running factories, banks, government agencies, and transport systems around the world.

Germany's interior ministry says that software companies need to do their own homework rather than blame governments for security breaches.

Microsoft's top lawyer, Brad Smith, had criticised governments on Sunday for "hoarding" vulnerabilities and urged authorities to report security problems to IT firms "rather than stockpile, sell, or exploit them".

Indian authorities were on high alert for news of malfunctioning computers yesterday after experts estimated that five per cent of affected computers were in the country.

The Computer Emergency Response Team of India issued a red-colored "critical alert" it's highest alarm level and urged computer users to update their systems and use protective software.

Britain's health service says that most hospitals hit by the global "ransomware" attack are back up and running, but seven are still experiencing IT disruption and cancelling appointments.

About a fifth of NHS trusts the regional bodies that run hospitals and clinics were hit by the attack on Friday, leading to thousands of cancelled appointments and operations.

Health officials say that seven of the 47 affected are still having IT problems and have asked for "extra support" from the National Health Service.

In France, auto manufacturer Renault said that one of its plants, which employs 3,500 people in Douai, northern France, wasn't reopening yesterday as technicians continued to deal with the aftermath of the global cyberattack.

The company described the temporary halt in production as a "preventative step".

A Japanese non-profit says computers at 600 locations were hit in the global "ransomware" cyberattack.

Nissan Motor Co confirmed yesterday some units had been targeted, but there was no major impact on its business.

At least one hospital was affected, according to police. The city of Osaka said its home page went blank, although problems were not detected otherwise.