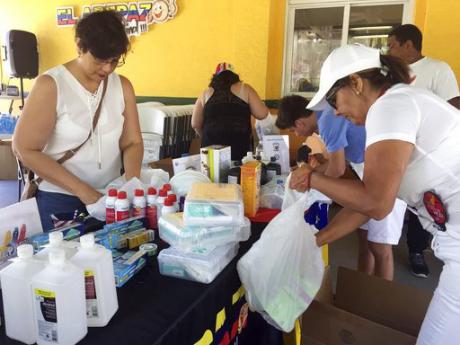 File
In this May 6, 2017 photo, volunteers pack first aid items bound for Venezuela at a restaurant in Miami.

In a stuffy, second-floor store room, a volunteer sorts through boxes of imported medicines and arranges them one by one on metallic shelves in alphabetical order. There's Euthyrox for thyroid problems, Clexane to stop blood clots and over-the-counter painkillers like Ibuprofen.

It's a thankless, routine task common to pharmacies and hospitals worldwide. But this being Venezuela, where shortages are widespread, viewing the treasure trove of sometimes hard-to-find medicines can feel almost subversive.

For months, as Venezuela's economy has gone off the rails, the United Nations, United States and Latin American governments have called for President Nicol·s Maduro to accept humanitarian aid to ease shortages that have helped spark a growing anti-government protest movement. The embattled socialist leader has refused, seeing foreign offers of help as a possible Trojan horse that could open the politically turbulent nation to foreign military intervention. The ban extends to the Roman Catholic Church's charity arm.

"The humanitarian corridor assumes the existence of a humanitarian crisis," Foreign Minister Delcy Rodriguez said recently, "It's a theory constructed by the Pentagon so that the US can intervene."

But in piecemeal fashion, with painstaking effort and quiet diplomacy, some groups are chipping away at the blockade. They include Accion Solidaria, which began two decades ago as a small clinic and support network for HIV/AIDS patients but has become a lifeline for Venezuelans suffering from all kinds of illnesses.

Every month, the group's offices in central Caracas provide free medicine to some 700 people arriving with a doctor's prescription and looking for some of the pharmaceutical drugs the organisation has collected from donors around the world. Its stockpile, posted daily online to its almost 20,000 Twitter followers, runs from neatly packaged drugs off the assembly line to half-filled pill containers with patients' names blacked out. The group also accepts expired medicines rather than provide nothing to people in need.

"It's not just people's physical well-being and the slow deterioration of their health, but, in some cases also, the mental anguish and damage that this situation produces," said Feliciano Reyna, the non-profit's founder.