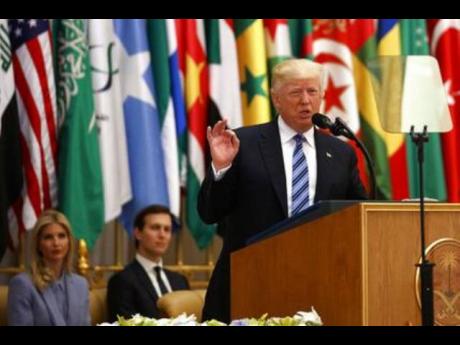 US President Donald Trump has urged Muslim countries to take the lead in combating radicalisation during a major speech in Saudi Arabia.

"Drive them out of this earth," the BBC said he told regional leaders in Riyadh as part of his first official trip abroad.

The countries, he said, could not wait for the US to counter extremist groups.

The speech is seen as a reset in Mr Trump's tone after his harsh campaign rhetoric on Muslims stirred concern in the Islamic world.

Speaking in the Saudi capital, he said: "This is a battle between barbaric criminals who seek to obliterate human life, and decent people of all religions who seek to protect it.

"That means honestly confronting the crisis of Islamist extremism and the Islamist terror groups it inspires."

His speech did not include the controversial phrase "radical Islamic terrorism". In the past, he has criticised his predecessor, Barack Obama, and others for not employing these terms, considered offensive by many Muslims.