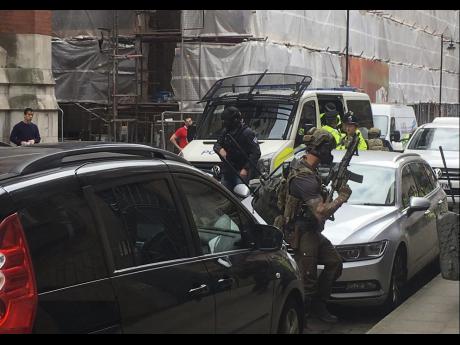 British investigators are hunting for potential conspirators linked to the bombing that killed 22 people in a search that is exploring the possibility that the same cell linked to the Paris and Brussels terror attacks was also to blame for the Manchester Arena attack, two officials familiar with the investigation said yesterday.

Investigators were also assessing whether Salman Abedi, the suspected bomber in the Monday attack on a pop concert in Manchester, may have been connected to known militants in the northern English city. Abedi, a 22-year-old British citizen born to Libyan parents, died in the attack.

Abedi's father, Ramadan Abedi, was allegedly a member of the al-Qaida-backed Libyan Islamic Fighting group in the 1990s, according to a former Libyan security official, Abdel-Basit Haroun. The elder Abedi denied that he was part of the militant group and told the Associated Press (AP) that his son was not involved in the concert bombing and had no connection to militants.

"We don't believe in killing innocents. This is not us," the 51-year-old Abedi said in a telephone interview from Tripoli.

He said he spoke to his son five days ago and that he was getting ready for a religious pilgrimage to Saudi Arabia. He said that his son visited Libya a month and a half ago and was planning to return to Libya to spend the holy month of Ramadan with the family. He also denied his son had spent time in Syria or fought with the Islamic State group, which claimed responsibility for the concert bombing.

"Last time I spoke to him, he sounded normal. There was nothing worrying at all until ... I heard the news that they are suspecting he was the bomber," the elder Abedi said.

He confirmed that another son, Ismail, 23, was arrested Tuesday in Manchester. A third son, 18-year-old Hisham, was arrested in Tripoli late last night, according to a Libyan government spokesman, Ahmed bin Salem. The elder Abedi was arrested shortly after speaking to the AP, Salem said.