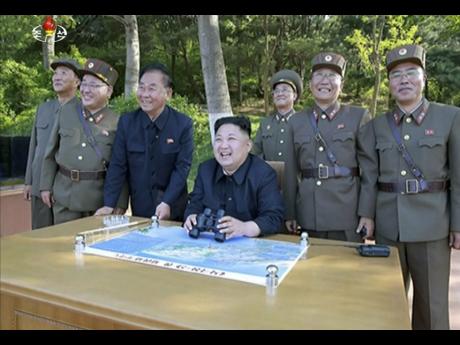 North Korean leader Kim Jong Un (centre) watches the test launch of what was said to be the Pukguksong-2 missile at an undisclosed location in North Korea.

North Korea said on Monday it is ready to start mass-producing a new medium-range missile after a weekend test-launch confirmed its combat-readiness.

It called the missile, capable of reaching Japan and major US military bases there, an "answer" to US President Donald Trump's policies.

The solid-fuel Pukguksong-2 missile flew about 500 kilometers (310 miles) and reached a height of 560 kilometers (350 miles) on Sunday before plunging into the Pacific Ocean. North Korea's media said more missiles would be launched in the future.

Trump, traveling in Saudi Arabia and Israel, had no immediate public comment.

North Korean leader Kim Jong Un ordered the launch and watched from an observation post, state media reported Monday. The Korea Central News Agency said the test verified technical aspects of the weapon system and examined its "adaptability under various battle conditions" before it is deployed to military units.

Kim reportedly said the launch was a success, "approved the deployment of this weapon system for action", and said that it should "be rapidly mass-produced."

North Korea has significantly sped up its missile tests over the past year or so and appears to be making tangible progress toward developing an arsenal that poses a threat to South Korea and Japan which together host about 80,000 US troops and developing an intercontinental ballistic missile capable of reaching the mainland United States.

It's moving ahead with its nuclear weapons programme as well.

North Korea conducted two nuclear tests last year. It claims that one was a hydrogen bomb and the other device created a more powerful explosion than any it has previously tested. Satellite imagery suggests that it could be ready to conduct its next test which would be its sixth at virtually any time.