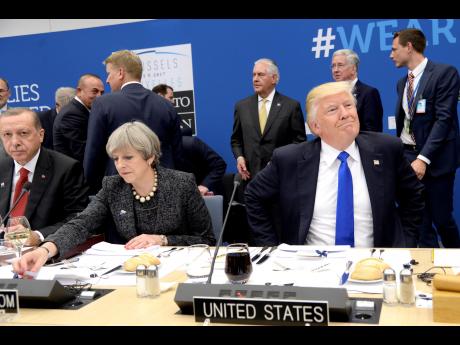 Thierry Charlier
US President Donald Trump (right) reacts as he sits next to Britain’s Prime Minister Theresa May (centre) and Turkish President Recep Tayyip Erdogan as they participate in a working dinner meeting, during the NATO summit of heads of state and government, at the NATO headquarters, in Brussels, yesterday.

Surrounded by stone-faced allies, President Donald Trump excoriated fellow NATO members yesterday for failing to meet the military alliance's financial benchmarks, asserting that that leaves it weaker than it should be and is "not fair to the people and taxpayers of the United States".

Trump, who has often complained back home about other nations' NATO support, lectured the other leaders in person this time, declaring, "Many of these nations owe massive amounts of money from past years."

The president's assertion immediately put NATO under new strain and did nothing to quiet questions about his complicated relationship with an alliance he has previously panned as "obsolete". Notably, he also did not offer an explicit public endorsement of NATO's "all for one, one for all" collective defence principle, though White House officials said his mere presence at the meeting signalled his commitment.

Fellow NATO leaders occasionally exchanged awkward looks with each other during the president's lecture, which occurred at an event commemorating the fall of the Berlin Wall and the September 11, 2001, terrorist attacks. When Trump tried to lighten the mood with a joke about NATO's gleaming new home base "I never asked once what the new NATO Headquarters cost" there was no laughter from his counterparts.

NATO officials had expected Trump to raise the payments issue during Thursday's meeting, even preparing Secretary-General Jens Stoltenberg for the prospect that the president could try to pull off a stunt like handing out invoices. But one European official said NATO members were still taken aback by the aggressive tone of his speech.

As a presidential candidate, Trump railed against NATO's financial burden-sharing, suggesting that the US might only come to the defense of countries that meet the alliance's guidelines for committing two per cent of their gross domestic product to military spending.