UK bomber said to have told mother 'forgive me' before blast 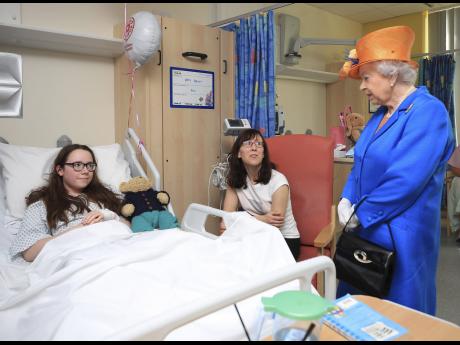 Peter Byrne
Britain’s Queen Elizabeth II (right) speaks to Amy Barlow, 12, from Rawtenstall, Lancashire (left) and her mother, Kathy, as she visits the Royal Manchester Children’s Hospital in Manchester England, to meet victims of the terror attack in the city earlier this week and to thank members of staff who treated them yesterday.

Britons faced stepped-up security as authorities pushed forward with raids they said were uncovering key evidence and a trans-Atlantic rift opened on Thursday in the aftermath of a deadly concert bombing.

The investigation of the Manchester Arena attack that killed 22 people extended across Europe and into Libya, where most of the suspected bomber's family lived. Authorities in multiple countries worked to determine if Salman Abedi, who died in the blast, acted alone or with assistance from a sophisticated cell.

After Abedi's mother and three of his siblings were brought in for questioning, a Libyan official told of a final phone call that he placed to his mother and brother just before the attack. On that call, he purportedly told his mother: "Forgive me," said Ahmed bin Salem, a spokesman for the Special Deterrent Force.

"He was giving farewell," bin

The number of arrests in the UK ticked up to eight as British Transport Police said armed officers would begin patrols on some trains because of an increased threat of terrorism.

Greater Manchester Police Chief Constable Ian Hopkins said, without elaborating, that searches of suspects' homes brought "very important" clues in the probe of Monday's bombing at the close of an Ariana Grande show. But leaks from the investigation were creating a diplomatic mess.

Manchester police have stopped sharing investigative information with the US until they are guaranteed an end to media leaks, a British official told the Associated Press on condition of anonymity because he was not authorised to speak publicly.