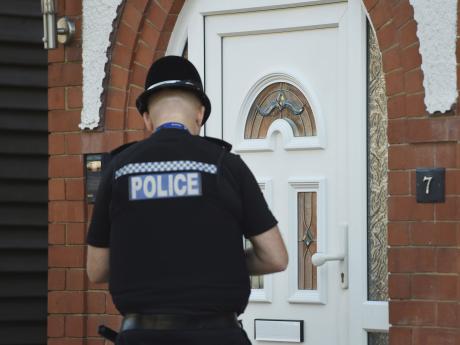 A police officer at the scene at an address in Nuneaton, England Thursday where they arrested a seventh suspect in the investigation into the Manchester Arena bombing.

U.S. Secretary of State Rex Tillerson is making a snap visit to London to show America's support for Britain after the Manchester bomb attack that killed 22 people.

The trip comes as police and government officials in England have been angrily denouncing alleged leaks to U.S. media outlets of information from the attack investigation.

The alleged leaks led British authorities to suspend some information sharing with the U.S. on Thursday.

Britain's Foreign Office said Thursday that Tillerson and Foreign Secretary Boris Johnson will hold talks and write messages of condolence for the victims.

The Foreign Office also says they plan to make brief statements to the press.

Tillerson does not plan to be accompanied by any journalists on the brief visit, after which he will return to Washington.

Meanwhile, British Transport Police says armed officers will patrol some U.K. trains for the first time because of the increased threat of extremist attacks.

Officials say the plan is to "ensure that the travelling public are kept safe on the rail network."

Armed officers have patrolled London Underground subway trains since December, but the move announced Thursday expands the security measure to train services elsewhere in the country.