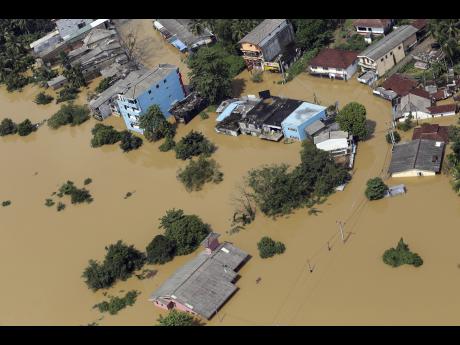 AP
An aerial view of inundated area of Kiriella, in Ratnapura district of Sri Lanka on Saturday. Sri Lankan rescuers pulled out more bodies under enormous mudslides on Sunday as the death toll climbed to 146 with 112 others missing.

Sri Lankan rescuers on Sunday pulled out more bodies that were buried by enormous mudslides as the death toll in the disaster climbed to 151, with 111 others missing.

Although the weather has cleared, more rains are forecast for Monday, threatening to bring further misery to over 100,000 people displaced in western and southern regions of the island nation that were lashed by two days of torrential rains.

Taking advantage of a lull in rain, soldiers cleared road access to most of the affected areas while others were reachable by boat, said Major General Sudantha Ranasinghe, who is heading the search-and-rescue mission. People waded in knee-deep floodwaters to get to army trucks transporting relief supplies and taking away those waiting to be evacuated.

Ranasinghe said that he didn't expect to find any more survivors.

Health minister Dr Rajitha Senarathna said that 102,218 displaced people were being sheltered in 339 relief centres. Special medical teams have been sent to the affected areas, while medicine has been sent by air to hospitals for which access has been cut off, he said.

Access roads are still blocked in some areas due to flooding, and fuel shortages have been reported, Senarathna said.

The UN said that it was assisting in relief efforts in response to a government appeal. It also promised to donate water-purification tablets, tents, and other supplies for the displaced. India sent a shipload of goods, while the United States and Pakistan also promised to send relief supplies.

Sri Lanka's Department of Meteorology warned that heavy downpours were expected in some of the affected areas.

Mudslides have become common during the monsoon season in Sri Lanka, a tropical Indian Ocean island nation, as land has been heavily deforested to grow export crops such as tea and rubber. Last May, a massive landslide killed more than 100 people in central Sri Lanka.