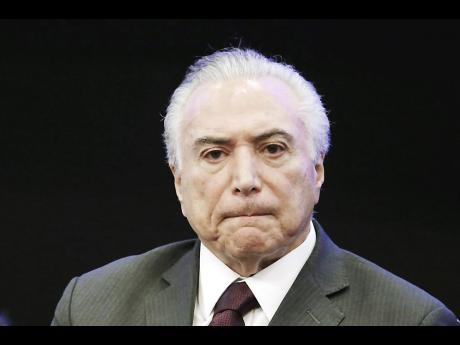 SAO PAULO (AP):
The union representing Brazil’s federal police investigators expressed concerns yesterday about how probes into government corruption will be handled by a personal friend of President Michel Temer who has been named the country’s new justice minister.

Torquato Jardim, who will oversee the investigators and other members of the federal police department, in the past has criticized the so-called Car Wash corruption probe that has now spread to include alleged bribes by a construction company of politicians around Latin America.

Jardim was appointed to the justice minister job on Sunday by Temer, who himself is under investigation for alleged obstruction of justice and corruption. The unpopular president has seen his support in Congress shrink amid growing pressures for him to step down. He denies any wrongdoing and has said he won’t resign.

Previous justice minister Osmar Serraglio, who was also criticised in the past by the police investigators’ union, was pressured to resign after he was linked to a corruption investigation in the meat business.

The union said in a statement on Sunday night that members had no idea that Temer’s appointment of Jardim was coming. It added that the change in justice ministers “brings concerns and uncertainty over the possibility of interference in the work performed by the federal police.”

Jardim is Brazil’s third justice minister in about a year. He has criticised federal police investigations, raids and strategies in the recent past.