World leaders reaffirm commitment to climate change fight, US pulls out of Paris accord 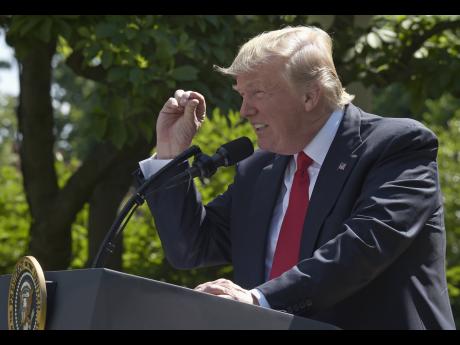 President Donald Trump announces that the US will withdraw from the Paris climate change accord, Thursday, in the Rose Garden of the White House in Washington. – AP

BERLIN (AP):
World leaders pledged Thursday to keep up the fight against global warming as US President Donald Trump announced he was pulling out of the Paris climate accord.

The European Union's top climate change official said Trump's decision to leave the Paris accord made it "a sad day for the global community."

The EU climate action commissioner, Miguel Arias Canete, said in a statement that the bloc "deeply regrets the unilateral decision by the Trump administration" but vowed "the world can continue to count on Europe for global leadership."

Canete also predicted that the EU would seek new alliances from the world's largest economies to the most vulnerable island states, as well as US businesses and individuals supportive of the accord.

Norway's largest pension fund with 53 billion euro ($59.5 billion) in assets under its management said it would also continue to invest in renewable energy despite the American president's decision, saying in a statement that "Donald Trump is jumping off a train that has already left the station."

Chief executive Odd Arild Grefstad cited the growth of renewable energy in US states such as Texas, New York and California as signs that "the world has started the transition from fossil to a renewable economy."

The US Conference of Mayors said it strongly opposed Trump's action and vowed that American mayors would continue efforts to reduce greenhouse gas emissions blamed for global warming.

New Orleans Mayor Mitch Landrieu, the group's vice president, said withdrawal from the agreement was "shortsighted" and called climate change a grave threat to coastal communities, the nation and the world. He said that if unchecked, sea-level rise caused by climate change could mean that New Orleans and other coastal cities "will cease to exist."

Before Trump announced his decision Thursday afternoon, Chinese Premier Li Keqiang told reporters during a visit to Berlin that fighting global warming was a "global consensus" and an "international responsibility."

Without mentioning the US specifically, Li said that "China in recent years has stayed true to its commitment" and pointed out that his was one of the first countries to ratify the 2015 Paris Agreement.

Germany's Angela Merkel, who in the past has been dubbed the "climate chancellor" for her efforts to fight global warming, said her country would "continue to fulfill our obligations under the Paris climate agreement as part of the European framework."

Five Nordic countries wrote a last-minute letter to Trump, saying the Paris accord was a commitment "to our children."

"We must reduce global warming," the leaders of Denmark, Finland, Iceland, Norway and Sweden said in a short, joint missive. "The effects are already visible in all parts of our planet. It is of crucial importance that all parties stick to the Paris Agreement."

Abandoning the pact isolates the US from a raft of international allies who spent years negotiating the 2015 agreement to fight global warming and pollution by reducing carbon emissions.

While traveling abroad last week, Trump was repeatedly pressed to stay in the deal by European leaders and Pope Francis.

Withdrawing would leave the United States as one of just three countries outside the agreement. The other two are Syria and Nicaragua.

Russia joined the chorus speaking out for the climate accord. Speaking to reporters on Thursday, a spokesman for President Vladimir Putin said Russia "thinks highly" of the accords and sees no alternative to it. Spokesman Dmitry Peskov added that its implementation will not be as effective "without the key signatories."

During a trip to Europe this week, Indian Prime Minister Narendra Modi expressed India's commitment to fighting climate change and said it would be a "crime" to spoil the environment for future generations.

Scientists say Earth is likely to reach more dangerous levels of warming sooner if the US retreats from its pledge because America contributes so much to rising temperatures.