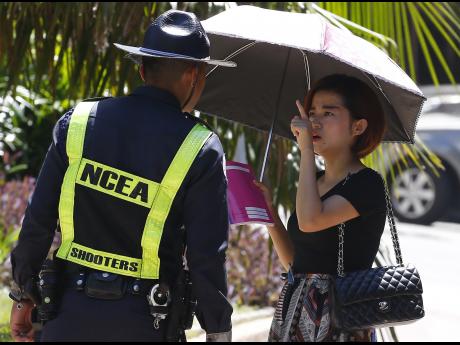 AP
A woman asks for directions as Resorts World Manila complex remains on a lockdown yesterday, a day after a gunman stormed the crowded Manila casino.

The security footage shows the man responsible for one of the Philippine capital's deadliest attacks in years casually exiting a taxi just after midnight and walking calmly into a vast entertainment and gambling complex like any other visitor.

Shortly afterwards, he dons a black mask, slips on an ammunition vest and pulls an M4 carbine assault rifle out of his backpack.

What follows borders on the surreal: a slow-motion arson attack and robbery so methodical and unhurried, the gunman appears to walk much of the way even as he exchanges fire with security forces and flees, slightly wounded, up a stairwell.

The Islamic State group claimed responsibility for the rampage last Friday at the Resorts World Manila complex; a least 37 patrons and employees died, mostly from smoke inhalation while they hid, while the gunman fled to an adjoining hotel and reportedly killed himself.

But authorities say the video footage shown to reporters yesterday by Resorts World bolsters the government's case that this was a botched robbery by a lone attacker with no known link to terrorism.

In his first remarks on the assault, Philippine President Rodrigo Duterte said the attacker was simply "crazy," questioning what the gunman was going to do with the $2 million horde of poker chips he had tried to haul away.

Duterte discounted any links to the Islamic State group, saying this "is not the work of ISIS. The work of the ISIS is more cruel and brutal."