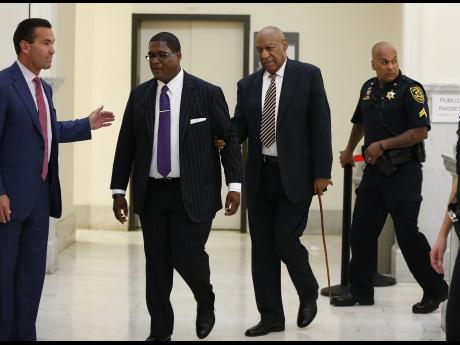 File
Lawyer Fortunato N Perri Jr waits for Andrew Wyatt, second from left, to guide Bill Cosby back to the courtroom after lunch during Cosby's sexual assault trial inside the Montgomery County Courthouse in Norristown, Pennsylvania on Monday.

A woman's claim that Bill Cosby drugged and sexually abused her at a Los Angeles hotel two decades ago was bolstered by her mother and a workers' compensation lawyer yesterday on Day Two of the comedian's trial.

Cosby, 79, is charged with sexually assaulting Andrea Constand at his suburban Philadelphia estate in 2004. But prosecutors opened their case on Monday by calling another woman to the stand, Kelly Johnson, to show that the TV star made a habit of knocking women out with pills and then molesting them.

Johnson testified on Day One that she lost consciousness soon after Cosby pressured her to take a large white pill. She said that when she awoke, Cosby was naked and forced her to sexually gratify him with her hand.

Yesterday, Johnson's mother, Pattrice Sewell, told jurors that her daughter was distraught during a telephone call in 1996, fearing Cosby was trying to get her fired from her job working for the comedian's agent. A few weeks later, Sewell said, Johnson disclosed that she had woken up next to Cosby in bed with her clothes askew.

The defence has attacked Johnson's credibility over discrepancies in her accounts, including the year it occurred. Cosby grinned at the defence table as she struggled to explain them.

Sewell, who prosecutors hoped would help corroborate Johnson's story, said they didn't go to police at the time because her husband, a Los Angeles detective, feared the ordeal that would ensue.

"Her father didn't want her to be humiliated and feel shame and embarrassment as he had seen other women go through when they went to the police at that time. He didn't want that," Sewell said.

Johnson told a similar story in 1996, when she gave sworn testimony in a deposition attached to a worker's compensation claim.

Joseph Miller, a workers' compensation lawyer, testified yesterday that he was taken aback when Johnson said she had been drugged and violated by Cosby. He said Johnson made the disclosure while pursuing a claim that she had developed debilitating stress from her secretarial job.

Joseph Miller said Kelly Johnson was tearful as she described waking up on a bed with her dress pulled down and her breast exposed details that matched the story Johnson told on the stand.

But Miller's timeline differed somewhat from Johnson's. He said she testified in 1996 about going to Bill Cosby's home after the alleged assault. Johnson said on Monday that that meeting happened beforehand.

Cosby's lawyers have argued that deceased witnesses, lost evidence and fading memories make it nearly impossible for them to defend the comedian against the 12-year-old complaint.

Prosecutors this week plan to call a toxicologist to discuss the effects of drugs like quaaludes, a powerful sedative, and the cold and allergy medicine Benadryl, both of which Cosby has acknowledged giving women before sexual encounters.

The Associated Press does not typically identify people who say they are sexual assault victims unless they grant permission, which Constand and Johnson have done.