Bill Cosby goes on trial, his freedom and legacy at stake 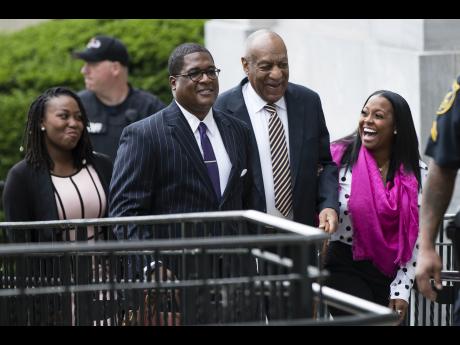 Accompanied into the courthouse by a member of the TV family who cemented his nice-guy image as America's Dad, Bill Cosby went on trial yesterday on sexual assault charges, his legacy and his freedom on the line.

Cosby, 79, is accused of drugging and violating an employee of Temple University's basketball programme at his suburban Philadelphia mansion in 2004. The comedian could get 10 years in prison if convicted.

His wife was absent as the TV star, using a wooden cane, hobbled past dozens of cameras into the courthouse. He chatted with actress Keshia Knight Pulliam, who played his daughter Rudy on the top-rated "Cosby Show," as they walked together.

Cosby smiled but said nothing when someone asked how he was feeling.

Judge Steven T. O'Neill instructed the jurors for an hour, reminding them not to glance at news updates on their cell phones. The jury was selected in the Pittsburgh area because of the heavy publicity surrounding the case and is sequestered at a hotel for the duration of the trial, expected to last two weeks.

Prosecutors and the defence were to give their opening statements later in the day.

Cosby's accuser, Andrea Constand, 44, of the Toronto area, is expected to take the stand this week and tell her story in public for the first time.

The jury consists of seven men and five women. Two members are black. Cosby has suggested that the accusations against him may be racially motivated.

Cosby built a good-guy reputation as a father and family man, on screen and off, during his extraordinary 50-year career in entertainment. He created TV characters, most notably Dr Cliff Huxtable, with crossover appeal among blacks and whites alike. His TV shows, films and comedy tours earned him an estimated US$400 million.