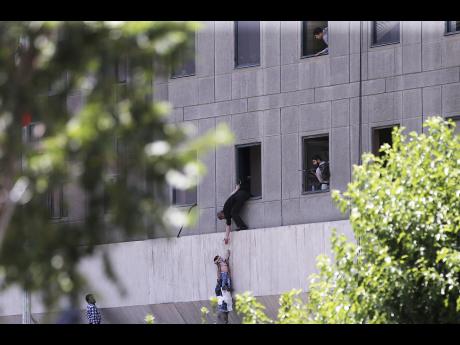 AP
A man hands a child to a security guard from Iran's parliament building after an assault of several attackers, in Tehran, Iran, yesterday.

The Islamic State (IS) group claimed responsibility yesterday for a stunning pair of attacks on Iran's parliament and the mausoleum of its modern founder, the first such attack claimed by the Sunni extremist group in the Shiite-ruled nation.

The lethal assaults, which killed at least 12 people and shocked the country, brought Iran's wars in Iraq and Syria to its capital at a time when emboldened Sunni Arab states - led by Saudi Arabia and backed by US President Donald Trump - harden their position on its Shiite leadership.

The attacks drew condemnations and condolences from the governments of Pakistan and from Iran's close allies in the Russian and Syrian governments.

The attacks began midmorning when assailants, armed with Kalashnikov rifles and explosives, stormed the parliament building. One of the attackers later blew himself up inside, where a session had been in progress, according to Iran's state TV.

It was an hours-long siege at the legislature that ended with four attackers dead. In images circulating in Iranian media, gunmen were seen holding rifles near the windows of parliament. Another image, carried in the semi-official Fars news agency, showed a toddler being handed off through a first-floor window to safety outside as an armed man looks on.

The IS group's Aamaq news agency released a 24-second video purportedly shot inside the parliament building during the siege. The video, circulated online, shows a bloody, lifeless body of a man lying on the ground next to a desk.

We will remain, God willing, says voice on tape

A voice on the video praises God and says in Arabic: "Do you think we will leave? We will remain, God willing." Another voice repeats the same words. The two appeared to be parroting a slogan used by IS spokesman Abu Mohammad al-Adnani, who was killed in Syria last year.

As the parliament siege was unfolding, gunmen and suicide bombers attacked the shrine of Iran's revolutionary leader, Ayatollah Ruhollah Khomeini, which is located just outside Tehran. Khomeini, who died in 1989, is a towering figure in Iran who led the 1979 Islamic revolution that toppled the Western-backed shah and became its first supreme leader.

Iranian Parliament Speaker Ali Larijani called the attacks a cowardly act and proof that Tehran has made an enemy of militant Islamic groups through its policies and actions in Iraq and Syria.