May vows to stay as UK PM; says Brexit will go on 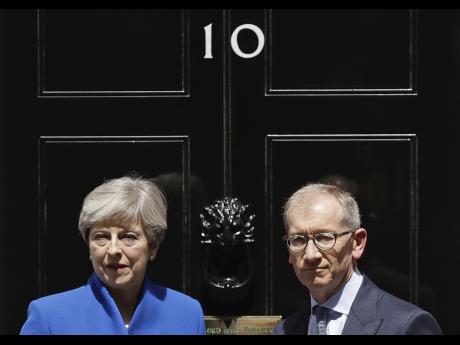 British Prime Minister Theresa May and her husband Philip stand on the doorstep of 10 Downing Street, London, after addressing the press on Friday.

LONDON (AP):
Spectacularly punished by voters who took away her majority in Parliament, a politically wounded but defiant Theresa May soldiered on Friday as Britain's prime minister, resisting pressure to resign after the failure of a high-stakes election gamble that made the massive challenge of untangling Britain from the European Union only more complex and uncertain.

Having called an early election in hopes of getting an increased majority that could have strengthened her hand in Britain's exit talks with the EU, May instead saw her majority evaporate completely — leaving her fortunes hanging by a thread and dark clouds over the Brexit negotiations just 10 days before they are due to start.

She insisted that she would stick to the Brexit timetable. But she was forced into an alliance with a small party in Northern Ireland just to stay in power. Grim-faced, May said her Conservatives and the Democratic Unionist Party would work together to "provide certainty and lead Britain forward at this critical time."

"This government will guide the country through the crucial Brexit talks ... and deliver on the will of the British people by taking the United Kingdom out of the European Union," she said after seeking Queen Elizabeth II's approval — a formality — for the new, hastily cobbled-together arrangement.

May's snap election call was the second time that a Conservative gamble on the issue of Britain's relations with Europe backfired. Her predecessor, David Cameron, first asked British voters to decide in 2016 whether to leave the EU.
Cameron, gambling that Britons wouldn't want to sever their network of ties with the continent, had promised the Brexit referendum during a 2015 election campaign that gave Conservatives a surprise Parliamentary majority. When voters stunned him and Europe by voting to leave, he resigned, leaving May to deal with the mess.