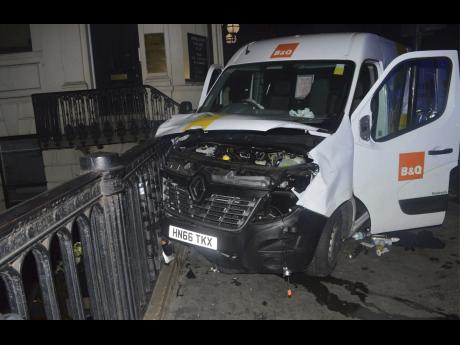 AP
An undated photo issued by the Metropolitan Police, London yesterday of the van used in the London Bridge attacks of Saturday June 3

British police have arrested two more suspects over the London Bridge attack and have revealed that the carnage could have been worse had the attackers succeeded in their goal of renting a larger truck, rather than a van, to mow down pedestrians.

The bloodthirsty gangsters were also shot dead before they could make their way back to the van, where their petrol bombs were stored.

London's Metropolitan Police said yesterday that they arrested a 27-year-old man and a 28-year-old man overnight in East London on suspicion of preparing acts of terrorism.

The police have seven people in custody over suspected links to the three attackers who killed eight people on and around London Bridge on June 3.

The police released details of their investigation yesterday as they appealed to the public for information, saying that Khuram Butt, believed to be the plot's ringleader, originally tried to rent a 7.5 ton box truck.

The intended truck was smaller but similar to the one used in the Nice attack last year that killed 86 people and injured hundreds in the resort town in the south of France.

After his payment was declined, Butt and his two accomplices rented a smaller van that they used to plough into crowds before they jumped from the vehicle and went on a stabbing rampage in an attack that left eight people dead and nearly 50 injured.

After leaving the small white van, the men used 12-inch knives with bright pink blades, according to Dean Haydon, head of the Metropolitan Police's Counter-Terrorism Command.

The police also disclosed that more than a dozen petrol bombs and two blowtorches were discovered in the van, and a copy of the Koran opened at a page "describing martyrdom" was found at one of the attackers' houses.

Investigators believe that three victims were killed on the bridge, including one man who was thrown into the River Thames, before the attackers left the vehicle and stabbed five people to death around London's busy Borough Market, Haydon said.