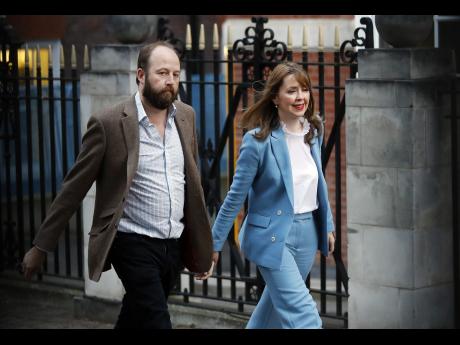 The two top aides to British Prime Minister Theresa May resigned yesterday, sacrificed in a bid to save their leader from being toppled by a furious Conservative Party after a disastrous election wiped out May's majority in Parliament.

The ballot-box humiliation has seriously - and possibly mortally - wounded May's leadership just as Britain is about to begin complex exit talks with the European Union.

Downing Street chiefs of staff Nick Timothy and Fiona Hill, who departed yesterday, formed part of May's small inner circle and were blamed by many Conservatives for the party's lack-lustre campaign and unpopular election platform, which alienated older voters with its plan to take away a winter fuel allowance and make them pay more for long-term care.

In a resignation statement on the Conservative home website, Timothy conceded that the campaign had failed to communicate "Theresa's positive plan for the future" and missed signs of surging support for the opposition Labour Party.

Some senior Tories had made the removal of Hill and Timothy a condition for continuing to support May, who has vowed to remain prime minister.

May's party won 318 seats, 12 fewer than it had before May called a snap election, and eight short of the 326 needed for an outright majority. The main opposition Labour Party surpassed expectations by winning 262.

Conservative legislator Nigel Evans said that the departure of the two aides was "a start," but there needed to be changes to the way the government functioned in the wake of the campaign.

He said that the Conservative election manifesto - which Hill and Timothy were key in drafting - was "a full assault on the core Tory voters, who are senior citizens".

Martin Selmayr, senior aide to European Commission President Jean-Claude Juncker, responded to the resignations by tweeting the word "bauernopfer" German for the sacrifice of a pawn in chess.

May called the early election when her party was comfortably ahead in the polls in the hope of increasing her majority and strengthening Britain's hand in exit talks with the EU.

Instead, the result has sown confusion and division in British ranks, just days before negotiations are due to start on June 19.