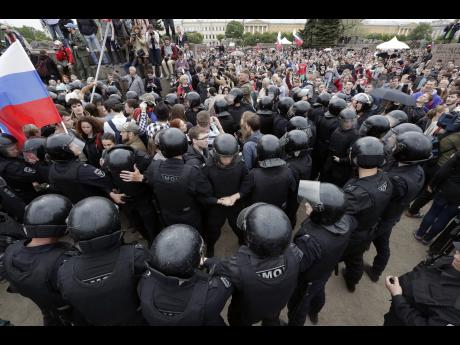 Hundreds of people were arrested yesterday in protests across Russia. The demonstrators are demanding an end to corruption they say is endemic among government officials.

While there are no official figures on how many people have been detained, an Associated Press reporter counted about 500 people forced into police buses in St Petersburg.

The demonstrators appeared to skew predominantly younger those who were born or grew up during Vladimir Putin's 17 years of leading Russia. Similar crowds turned out in March, rattling officials who had perceived the younger generation as largely apolitical.

Putin is expected to seek another term as president in 2018, and opposition leader Alexei Navalny has already announced his intentions to run.

Navalny was among those arrested yesterday.

Demonstrators in opposition protests across Russia say that they are fed up with endemic corruption among officials.

The protest gatherings in cities from Far East Pacific ports to St Petersburg were spearheaded by Alexei Navalny, the anti-corruption campaigner who has become the Kremlin's most visible opponent.

"We are against the corruption that is costing the future of our young people," said 33-year-old Maria Badyrova, one of the demonstrators who gathered on a main Moscow thoroughfare for an unsanctioned protest.

In Vladivostok, where hundreds of people assembled for a protest, demonstrator Alexei Borenko said that after eluding police attempts to detain him, he was "here first of all because of the corruption in Russia, which is becoming incredibly big in Russia".