Bill Cosby jury drills down on his deposition testimony 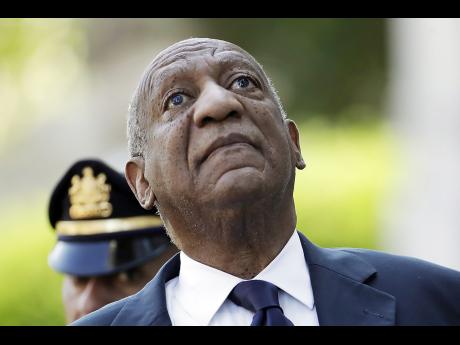 The jury in the Bill Cosby sexual assault case drilled down yesterday on what the TV star said happened inside his suburban Philadelphia home and how he characterised his relationship with the accuser as it weighs charges that could send him to prison for the rest of his life.

Jurors began their second day of deliberations by reviewing more than a dozen passages from a deposition Cosby gave more than a decade ago. They heard excerpts covering a wide range of topics, from Cosby's first meeting with Andrea Constand to the night in 2004 she says he drugged and violated her.

As he described reaching into Constand's pants, Cosby testified, "I go into the area that is somewhere between permission and rejection. I am not stopped."

Cosby is charged with drugging and molesting Constand, 44. His lawyer has said they were lovers sharing a consensual sexual encounter.

Cosby testified under oath more than a decade ago as part of Constand's civil suit against him. The 79-year-old entertainer did not take the stand at his trial, but prosecutors used his deposition testimony as evidence.

For the second time in their deliberations, the jurors asked to revisit a portion of the deposition in which the comedian talked about giving Constand "three friends".

"She sat with her back to the kitchen wall," Cosby said. "And there was talk of tension, yes, about relaxation and Andrea trying to learn to relax the shoulders, the head, et cetera. And I went upstairs and I went into my pack and I broke one whole one and brought a half down and told her to take it."

"Your friends," Cosby said he told her. "I have three friends for you to make you relax."

... Unable to fight back when he entered her pants

Cosby later told police the pills were Benadryl, an over-the-counter cold and allergy medicine. Constand an athletic, 6-foot-tall college basketball staffer said they made her dazed and groggy, and unable to say no or fight back when Cosby went inside her pants.

The defence insisted throughout the trial that Constand hid the fact they'd had a romantic relationship before the early 2004 encounter when she went to police a year later. Cosby, his lawyer said, never ran from talking to police, for better or worse.

"He never shuts up," lawyer Brian McMonagle said of his client in closing arguments Monday morning.

Nonetheless, the comedian whose storytelling artistry fuelled a $400 million fortune went quiet Monday when he had the chance to take the stand.

The defence started and ended its case Monday with six minutes of repeat testimony from a detective.