Former NBA bad boy Rodman is back in North Korea 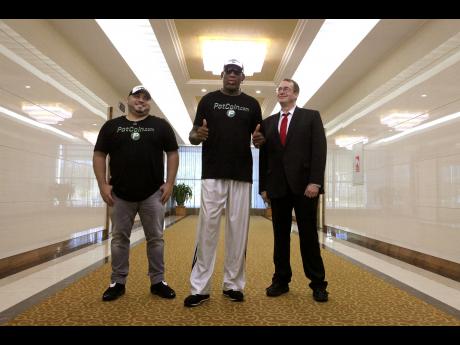 Dennis Rodman, the former NBA bad boy who has palled around with North Korean leader Kim Jong Un, flew to Pyongyang yesterday on a trip he says he hopes will "open a door" for his former "Celebrity Apprentice" boss U.S. President Donald Trump.

Hours after his arrival, U.S. Secretary of State Rex Tillerson announced that North Korea had released an American student serving a 15-year prison term with hard labour for alleged anti-state acts. The family of Otto Warmbier said he was in a coma and was on a Medivac flight home. It wasn't immediately clear whether his release was connected to Rodman's visit.

Rodman, one of the few people to know both of the nuclear-armed leaders, sported a black T-shirt advertising a cybercurrency used to buy and sell marijuana as he talked to reporters briefly before boarding his flight from Beijing to the North Korean capital. Rodman's arrival in Pyongyang was relatively low-key and his schedule remained a mystery. He was met by North Korean Vice Minister of Sports Son Kwang Ho. Officials said he was to stay until Saturday. He breezed through customs and immigration at Pyongyang's airport before being whisked away to his hotel.

"I'm just here to see some friends and have a good time," he said.

Rodman received the red-carpet treatment on his four past trips since 2013, which generated a lot of publicity most of it not good and did little in terms of diplomacy. On this trip, he has already been roundly criticised by some for visiting during a time of high tensions between the U.S. and North Korea over its weapons programmes and recent missile launches.

"Well, I'm pretty sure he's pretty much happy with the fact that I'm over here trying to accomplish something that we both need," Rodman said in Beijing when asked if Trump was aware of the trip.