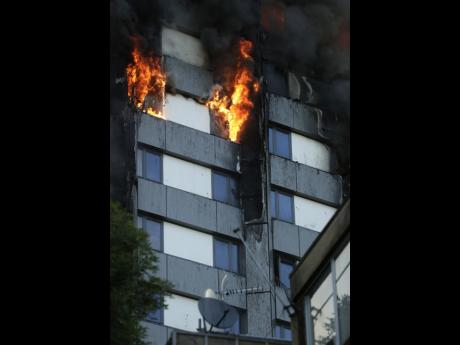 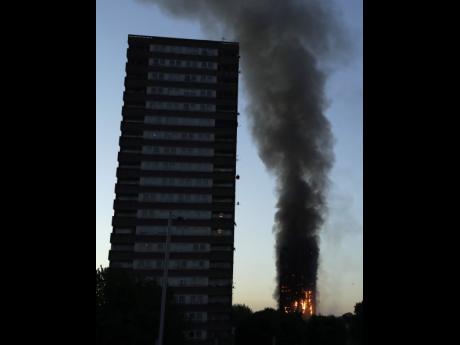 AP
Smoke and flames rise from a building on fire in London, yesterday.(AP)
1
2

A fast-moving overnight fire engulfed a 24-storey apartment tower in London yesterday, killing at least six people and injuring 74 others, police said. Desperately trying to avoid the flames, residents threw babies and small children from high windows to people down on the sidewalk, witnesses said.

The inferno lit up the night sky and spewed black smoke from the windows of the Grenfell Tower in North Kensington, where more than 200 firefighters battled the blaze. The smoke stretched for miles (kilometres) across the sky after dawn, revealing the blackened, flame-licked wreckage of the building, which was still burning over 12 hours later.

People trapped by the advancing flames and thick smoke banged on windows and screamed for help, witnesses and survivors said. One resident said the fire alarm did not go off bolstering the arguments of a community group, which only months ago had warned of a potential catastrophe at the subsidised housing block.

"The flames, I have never seen anything like it, it just reminded me of 9/11," said Muna Ali, 45. "The fire started on the upper floors ... oh my goodness, it spread so quickly. It had completely spread within half an hour."

"This is an unprecedented incident," Fire Commissioner Dany Cotton told reporters. "In my 29 years of being a firefighter I have never, ever seen anything of this scale."

She said she feared more victims would be found still inside the tower, where up to 600 people lived in 120 apartments. By mid-afternoon, firefighters were carrying out systematic searches throughout the charred wreckage.

There was no immediate word on the cause of the blaze in London yesterday, but angry residents said they had warned local authorities about fire issues at Grenfell Tower. The housing block, built in 1974, was recently upgraded at a cost of £8.6 million (US$11 million), with work finishing in May 2016, according to the Royal Borough of Kensington and Chelsea.

Samira Lamrani, a witness, said one woman dropped a baby from a window on the ninth or 10th floor to people on the sidewalk.

"People were starting to appear at the windows, frantically banging and screaming," and one woman indicated she was going to drop the baby, Lamrani told Britain's Press Association news agency. "A gentleman ran forward and managed to grab the baby."

Joe Walsh, 58, said he saw someone throw two children out of a window from the fifth or sixth floor. Tiago Etienne, 17, said he spotted about three children between the ages of four and eight being dropped from an apartment around the 15th floor.