Growing frenzy outside court as Cosby deliberations wear on 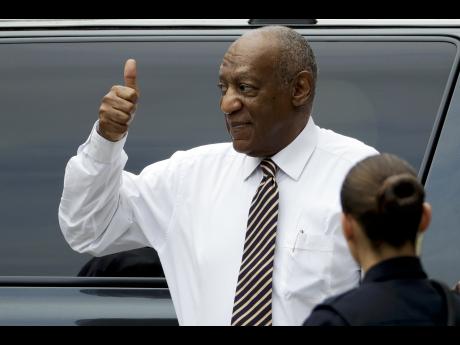 AP
Bill Cosby gives a thumbs-up as he arrives at his sexual assault trial for another day of jury deliberations at the Montgomery County Courthouse, yestersday in Norristown, Pa.

For all the ways the judge in Bill Cosby's sexual assault trial has streamlined the case inside the courtroom, the frenzy outside grows larger and wilder each day of jury deliberations.

The media presence, large but manageable during five days of testimony last week, has ballooned as the verdict seems near. In a staging area where celebrity lawyer Gloria Allred and others have been speaking to the press, the podium was damaged under the growing weight of microphones.

Hotel rooms are sold out for miles. Victim advocates grow in number on the courthouse steps, and the Cosby camp's spin grows louder.

Cosby arrived yesterday morning for the start of Day Three of jury deliberations in his sexual assault trial, entering the suburban Philadelphia courthouse on the arm of his spokesman. The panel, which already has deliberated 16 hours over two days, went straight to the jury room for the resumption of talks.

Cosby spokesman Andrew Wyatt, who guides the vision-impaired Cosby throughout his day, has drawn throngs of cameras with his updates on Cosby's mood "very confident," is a common refrain and assertions that the 79-year-old comedian isn't getting a fair shake.