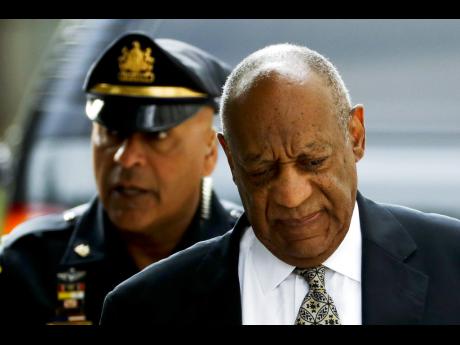 NORRISTOWN, Pennsylvania (AP):
Jurors in Bill Cosby's sexual assault trial told a judge Thursday they're deadlocked on charges the comedian drugged and molested a woman in 2004, but they were ordered to keep trying to reach a unanimous decision in a case that has already helped obliterate his career and nice-guy reputation.

The panel deliberated about 30 hours over four days before telling Judge Steven O'Neill they "cannot come to a unanimous consensus on any of the counts" against Cosby, 79, who is charged with three counts of aggravated indecent assault.

The judge sent them back to the jury room to keep talking and denied a defense motion for a mistrial.

The sequestered jurors have appeared increasingly tired and upset after deliberating late into the night the past three days. Some jurors looked defeated as the judge ordered them to continue deliberating. One, more upbeat, nodded along.

The case involves Cosby's sexual encounter with Andrea Constand, 44, at his suburban Philadelphia home. Constand says Cosby gave her pills that made her woozy, then violated her. His lawyer says Cosby and Constand were lovers sharing a consensual moment of intimacy.

"They're conflicted about the inconsistencies in Constand's testimony," spokesman Andrew Wyatt said. "And they're hearing Mr C.'s testimony and he's extremely truthful. And that's created this doubt."

Constand's lawyer did not immediately respond to a request for comment.

Dozens of women have come forward to say Cosby had drugged and assaulted them, but this was the only case to result in criminal charges.

The 12-member jury must come to a unanimous decision to convict or acquit. If the panel can't break its impasse, O'Neill could declare a hung jury and a mistrial. In that case, prosecutors would get four months to decide whether they want to retry the TV star or drop the charges.

Penn law professor David Rudovsky, a criminal lawyer in Philadelphia, said Thursday that the stalemate didn't surprise him, given the nature of the case. He added a hung jury would be a victory for Cosby.