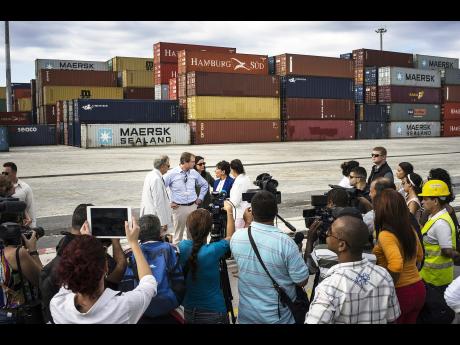 AP
In this October 6, 2015 file photo, U.S. Commerce Secretary Penny Pritzker, centre, visits the container terminal at the port in the Bay of Mariel, Cuba. President Donald Trump was expected to announce a reversal on the U.S. Cuba policyyesterday and Cubans are bracing for the worst. (AP)

Church bells rang out and Cubans strung American flags from their windows when President Barack Obama announced in December 2014 that the US would stop trying to push Cuba towards collapse.

Obama's new policy of engagement unleashed a flood of American visitors, pumping cash into Cuba's nascent private sector, even as the centrally planned economy hit its first recession in nearly a quarter-century. Many Cubans did better. But most lives remained a grinding daily struggle. Jubilation faded to resignation.

President Donald Trump was yesterday expected to give America's Cuba policy its second 180-degree spin in three years during an appearance in Miami, reviving the Cold War goal of starving Cuba's communist system of cash while inciting the population to overthrow it. On the table: cutbacks on US travel to Cuba and a ban on doing business with the military-linked conglomerate that controls much of the Cuban economy.

Ordinary Cubans are bracing for the worst. Across the island, people of all ages, professions and political beliefs expect rising tensions, fewer American visitors and a harder time seeing relatives in the US. And while some Cuban exiles in South Florida are celebrating, others question the wisdom of undoing a policy that had started showing results by increasing the number of Cubans economically independent of the government.

In 1980, some 125,000 Cubans fled the port of Mariel on boats to the US in the largest single exodus of refugees in modern Cuban history. Today, the city 30 miles west of Havana is home to the country's main cargo facility, where freighters unload containers of supplies for the nation's booming tourism industry.

A few miles from the gates of the port, 42-year-old Yosvani Reinoso works as a self-employed locksmith from a stand on Mariel's main square.

He hasn't seen his life improve much since the US and Cuba re-established friendly relations, but the restart of commercial flights after a half-century gave his wife hope that she could afford to visit her 19-year-old son who emigrated to the US two years ago.

Donald Trump's looming policy change has her worried that the cheaper, more convenient flights could soon be a thing of the past.

"All of the problems between the two countries need to end so she can go to the US Embassy and say, 'I want to see my son,' buy a ticket and go for the weekend," Reinoso said. "The best thing that can happen for the two countries is for all of these problems to end, for everything to be normal."

No Castro, no problem - Cuban Ambassador to Jamaica confident that the relationship between the two countries will remain tight
Guyana to resume rice export to Cuba after 18 years
Regional shipping conference spotlights trade opportunities with Cuba
Don't panic, just prepare - Former Caribbean diplomats call on Ja to increase competitiveness as US-Cuba relations normalise
Saudi prisoner at Guantanamo released by US after 14 years