Puzzle over ship crash which left seven US soldiers missing 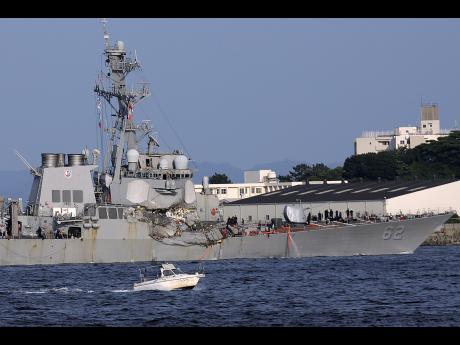 AP
The damaged ‘USS Fitzgerald’ is seen near the US Naval base in Yokosuka, southwest of Tokyo, after the US destroyer collided with the Philippine-registered container ship ‘ACX Crystal’ yesterday.

United States and Japanese vessels and aircraft searched yesterday for seven American sailors who were missing after their Navy destroyer collided before dawn with a container ship four times its size off the coast of Japan.

The USS Fitzgerald was back at its home port in the Yokosuka Naval Base, south of Tokyo, by sunset yesterday, its crew lined up on deck. The Philippine-flagged container ship was berthed at Tokyo's Oi wharf, where officials began questioning crew members about the cause of the night-time crash.

After helping to stabilise the USS Fitzgerald, the destroyer, USS Dewey, joined other American and Japanese vessels and aircraft in the search for the missing sailors.

At least three other Navy sailors were injured in the collision.

Family members were frantically seeking news, appealing via social media for calls from sailors aboard from the ship.

The US 7th Fleet said in a statement that the crash damaged two berthing spaces, a machinery room and the radio room. Most of the more than 200 sailors aboard would have been asleep in their berths at the time of the predawn crash.

Water was being pumped out of flooded areas and it was unclear how long it would take to get into the crushed mid-right side of the ship once it was at the pier in Yokosuka, the statement said.