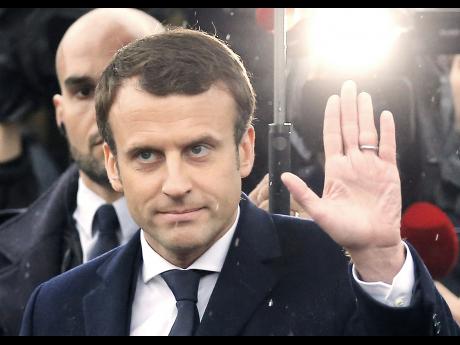 President Emmanuel Macron's party, including untested novices, will be sweeping into the lower house of the French parliament, hogging a clear majority of seats after winning an overwhelming victory in Sunday's elections and clinching the young leader's hold on power.

Macron fulfilled his wish to disrupt politics as usual with new faces - including a farmer, a teacher and a math genius - and a new approach. But he may be getting more than he bargained for with the entry into parliament of loud voices from the ultra-left and far-right National Front leader Marine Le Pen, both promising to fight his plans to overhaul French labor laws, one of the touchiest subjects in France.

"Through their vote, a wide majority of the French have chosen hope over anger," said Prime Minister Edouard Philippe, reiterating his "total" determination to work on major reforms in the coming months.

A minor reshuffle of the Cabinet, an obligatory move after parliamentary elections, is expected this week, perhaps as soon as today.

The May 7 election of the 39-year-old Macron, himself untested, upended France's political landscape, a phenomenon that continued with the parliamentary victory of a party that didn't exist 14 months ago. With the June 27 start of the new session, the novices within the ranks of Macron's Republic on the Move! party will be learning at high-speed. Half of the candidates in the running for his party were drawn from civilian life, and half were women.

Starting today, many will be taking their first official steps in the corridors of power, invited to pick up keys and the blue-white-red sashes warn by elected officials, and learn their way around.

Pollsters projected Republic on the Move! and its allies could take up to about 360 of the lower chamber's 577 seats. Official partial results confirmed the trend, showing them with 327 seats, with 33 seats yet to be counted. The party will have far more than the 289 seats needed for an absolute majority to carry out Macron's programme.