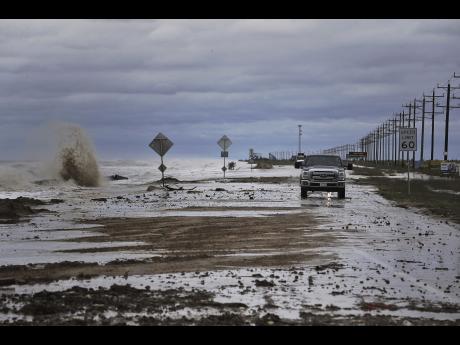 A boy on an Alabama beach was struck and killed yesterday by a log washed ashore by storm surge from Tropical Storm Cindy, which spun bands of severe weather ashore from the Florida panhandle to east Texas as it churned ever closer to the Gulf coast.

Baldwin County Sheriff's Capt Stephen Arthur said witnesses reported that the 10-year-old boy from Missouri was standing outside a condominium in Fort Morgan when the log, carried in by a large wave, struck him. Arthur said the youth was vacationing with his family from the St Louis area and that relatives and emergency workers tried to revive him. He wasn't immediately identified.

It was the first known fatality from Cindy. The storm formed on Tuesday and was expected to make landfall some time late Wednesday or early Thursday near the Louisiana-Texas line. The worst weather was on the east side of the storm. It included drenching rains that posed flash flood threats, strong tidal surges, waterspouts and reports of possible tornadoes.

Louisiana Gov John Bel Edwards declared a state of emergency, like his Alabama counterpart a day earlier. He was among authorities stressing that the storm's danger wasn't limited to the coast.

In Knoxville, Tennessee, the power-generating Tennessee Valley Authority (TVA), said it was drawing down water levels on nine lakes it controls along the Tennessee River and its tributaries in Tennessee, Alabama and Kentucky, anticipating heavy runoff from Cindy's rains once the storm moves inland. The TVA manages 49 dams to regulate water, provide power and help control downstream flooding.

The storm was centred yesterday afternoon about 135 miles (215 kilometres) south of Lake Charles, Louisiana, and had top sustained winds of 50mph (85kph). A tropical storm warning was in effect along the coast from San Luis Pass, Texas, to the mouth of the Mississippi River.