S. Korea fires missiles in drills amid standoff with North 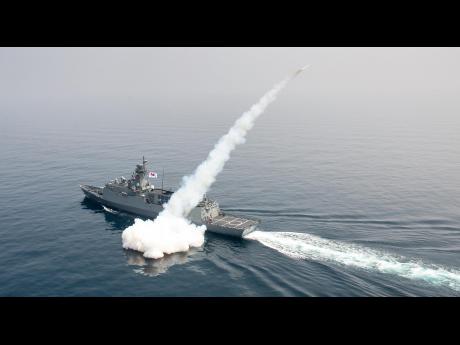 The North's ICBM launch, its most successful missile test to date, has stoked security worries in Washington, Seoul and Tokyo as it showed the country could eventually perfect a reliable nuclear missile capable of reaching anywhere in the United States. Analysts say the missile tested on Tuesday could reach Alaska if launched at a normal trajectory.

The live-fire drills off South Korea's east coast were previously scheduled. In a show of force, South Korea and the United States also staged "deep strike" precision missile firing drills on Wednesday as a warning to the North.

In North Korea's capital, thousands of people rallied on Thursday in Kim Il Sung square to celebrate the launch.

The rally was followed by a fireworks display along the Taedonggang, a river that runs through central Pyongyang.

North Korea often stages rallies in the square to mark events that it wants to underscore as particularly significant. A similar rally was held last month on the anniversary of the beginning of the 1950-53 Korean War.

Yesterday's drills in South Korea were aimed at boosting readiness against possible maritime North Korean aggression. They involved 15 warships, including a 3,200-ton class destroyer, as well as helicopters and fighter jets, South Korea's navy said in a statement.

"Our military is maintaining the highest level of readiness to make a swift response even if a war breaks out today," said Rear Admiral Kwon Jeong Seob, who directed the drills, according to the statement.