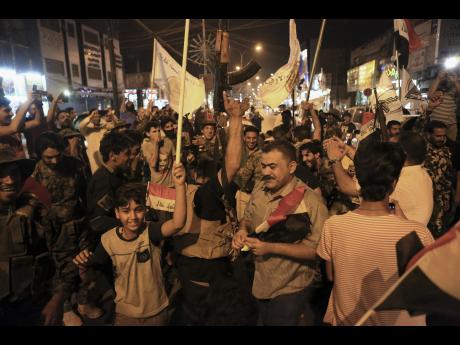 AP
Iraqi security and civilians celebrate while holding national flags as they wait for the final announcement of the defeat of the Islamic state militants, in Basra, 340 miles southeast of Baghdad, Iraq, yesterday.

Prime Minister Haider al-Abadi congratulated Iraqi troops yesterday in the streets of Mosul for driving Islamic State militants out of most of the city. But airstrikes and sniper fire continued amid the revelry, and the extremists stubbornly held small patches of ground west of the Tigris River.

Over the nearly nine-month campaign, Iraqi forces - backed by airstrikes from the US-led coalition - reduced the IS hold on Iraq's second-largest city to less than a square kilometre (less than a mile) of territory.

Still, al-Abadi and Iraqi commanders stopped short yesterday of declaring an outright victory against the extremists, who have occupied Mosul for three years. Losing Mosul would be a major defeat for the Islamic State, which has suffered major setbacks in the past year.

"We are glad to see normal life return for the citizens," al-Abadi said, according to a statement from his office. "This is the result of the sacrifices of the (country's) heroic fighters."

Dressed in a black military uniform, the prime minister met field commanders, kissed babies and toured a reopened market in western Mosul. At one point, he briefly draped an Iraqi flag on his shoulders.

A few kilometres away, special forces commanders climbed over mounds of rubble on the edge of Mosul's Old City to plant an Iraqi flag on the western bank of the Tigris, marking weeks of hard-fought gains in the heart of the congested district.

Suddenly, two shots from an IS sniper rang out, sending the men scrambling for cover. The flag was retrieved and planted farther upriver behind a wall that protected it from a cluster of IS-held buildings nearby.

"We've been fighting this terrorist group for 31/2 years now," said Lt. Gen. Abdul Wahab al-Saadi of the special forces. "Now we are in Mosul, the east part was liberated, and there's only a small part left in the west."