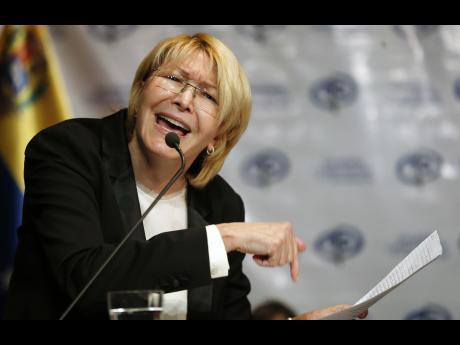 Opponents of President Nicolas Maduro who have taken to the streets day after day in Venezuela now find themselves rallying in support of an unexpected hero: the chief prosecutor who helped throw many of them into jail.

Until recently, Luisa Ortega was seen as a hard-line loyalist of the socialist administration, responsible for dozens of arrests on trumped-up charges against anti-government protesters.

But now she is being lionised by the opposition and disaffected supporters of the late Hugo Chavez alike for her decision to break with Maduro, the handpicked successor to 'El Comandante'.

The Venezuelan opposition's embrace of Ortega, however tactical and awkward, underscores a stark truth after three months of paralysing but so far unsuccessful protests: Removing Maduro will require winning over some of his backers.

Ortega, the most prominent defector so far, brings a unique combination of impeccable revolutionary credentials, intimate knowledge of the government's inner workings and a semi-autonomous post with which to challenge the government's moves to centralise power and crush the opposition.

Many in the opposition suspect she has access to damaging information about corruption in Maduro's inner circle.

Ortega couches her criticism in the language of Chavez when speaking to Venezuelans, many of whom still revere the charismatic leader. Polls say they are fed up with Maduro, but also distrust the traditionally elite-dominated opposition.