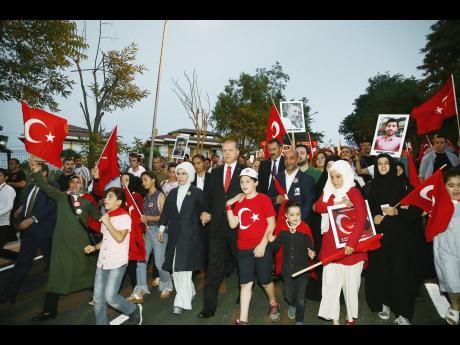 As part of the commemoration, Turkish President Recep Tayyip Erdogan flew to Istanbul and was photographed waving at a fighter jet escorting his aircraft.

Accompanied by children who were wearing shirts with Turkish flags, and relatives of the deceased, Erdogan then joined the crowd near the bridge, where he was to unveil a Martyr's Memorial to honour those who died opposing the coup.

"It has been exactly one year since Turkey's darkest and longest night was transformed into a bright day, since an enemy occupation turned into the people's legend," Prime Minister Binali Yildirim said earlier in the day at a special parliamentary session in Ankara, the capital, attended by Erdogan.

Turkish soldiers attempted to overthrow the government and the president, using tanks, warplanes and helicopters, on July 15, 2016.

The coup plotters declared their seizure of power on the state broadcaster, bombed the country's parliamentary building and other key locations, and raided an Aegean resort where Erdogan had been on vacation.

But Erdogan had already left, and the coup attempt was put down by civilians and security forces.