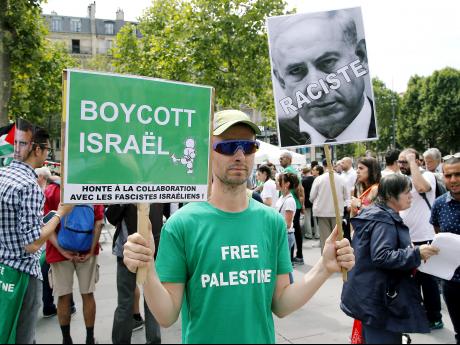 AP
A pro-Palestinian activist holds a placard and picture of Israeli Prime Minister Benjamin Netanyahu as he gathers to protest the Israeli prime minister’s visit to Paris, France, yesterday.

Protesters in the French capital have criticised President Emmanuel Macron for inviting Israeli Prime Minister Benjamin Netanyahu to Paris, condemning the Israeli settlement policy and the blockade of Gaza.

Olivia Zemor, president of the EuroPalestine association, told the AP news agency yesterday that "rolling out the red carpet" to someone she said violated international conventions did not send the right signal and was "embarrassing".

"We called for this protest, we protest Emmanuel Macron's invitation to Netanyahu and his rolling out of the red carpet to a criminal, a torturer - the torture of men and children exists - a land thief, to someone who does not respect international law and human rights, which is embarrassing," said Zemor.

Yassine Blicqy, a 19-year-old protester from Valenciennes, said: "I hope that France, in the next few years or even decades, will choose justice and will side with the oppressed peoples because that's what France is about. It's not oppression. It's freedom and human rights; it's diversity and equality, and we must give an example."

Macron invited Netanyahu to take part in a commemoration on Sunday of a mass deportation of French Jews to Nazi camps 75 years ago.