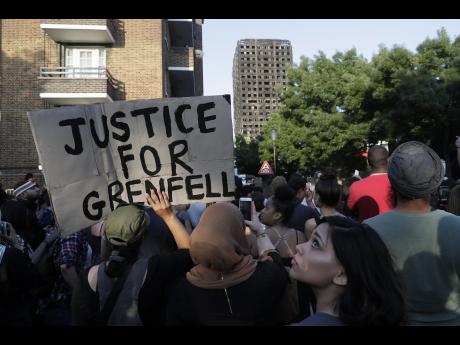 Tim Ireland
Protesters walk towards the Grenfell Tower, during a demonstration following the fire that engulfed the 24-storey building on Wednesday morning, in London.

British police said yesterday they have "reasonable grounds" to suspect that local authorities may have committed corporate manslaughter in a deadly high-rise fire in London.

The news came in a letter from police sent to residents of the building. The letter said a senior representative of each body will be interviewed about the fire as part of the police investigation.

The police force confirmed to The Associated Press that the letter is genuine, but stressed it does not mean a decision has been made on whether to charge any individual or organisation.

Police have said for weeks that their investigation will consider whether anyone should be charged with a crime. The force said Thursday it was "considering the full range of offences, from corporate manslaughter to regulatory breaches."

At least 80 people died June 14 when an early morning fire ripped through the west London high-rise. It was the deadliest fire in Britain in more than a century.

Huge investigations by police, fire officials and others are underway to determine how a blaze that started with a refrigerator in one apartment got out of control so quickly in the 24-story building.

Attention has focused the building's new aluminum cladding, installed during a recent renovation, and authorities want answers fast because thousands of other buildings in the country could be affected.

Angry residents want to know how building regulations that were meant to be among the world's best could have failed so catastrophically. Many accuse officials in Kensington and Chelsea, one of London's richest boroughs, of ignoring their safety concerns because the building was home to a largely immigrant and working-class population.