US-backed Syrian fighters now control almost half of IS city 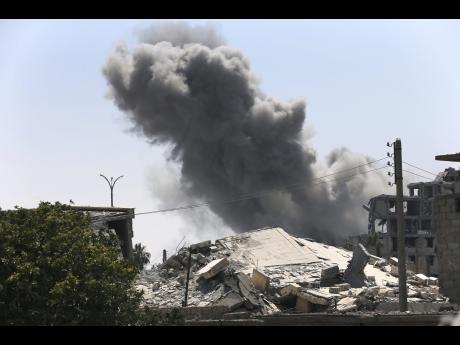 =053011000379=
Black smoke rises from a coalition airstrike which attacked an Islamic State militant position, on the front line on the eastern side of Raqqa, Syria on Wednesday.

US-backed Syrian fighters have captured almost half of the Islamic State group's de facto capital of Raqqa, but the push into the city in northern Syria has slowed due to stiff resistance and large amounts of explosives planted by the extremists, a spokeswoman for the fighters and monitors said yesterday.

The assault on Raqqa by the Syrian Democratic Forces, a Kurdish-led fighting coalition, began June 6, backed by US-led coalition airstrikes and US troops advising the local forces.

Since then, the SDF has made steady advances from the eastern and western sides of the city, reaching the walled old quarter.

The fall of Raqqa, IS' self-proclaimed capital, would be a huge loss for the extremist group, which earlier this month lost the Iraqi city of Mosul. But much tougher fighting still lies ahead.

Army Col. Ryan Dillon, the spokesman for the U.S.-led coalition fighting the Islamic State group, said 45 percent of Raqqa is now under the control of the SDF.

In a series of tweets, he said the SDF cleared about 9 square miles of terrain this past week fighting against "stiff, sporadic resistance" from IS militants entrenched in Raqqa.

She said the city is encircled and "there is no way for them to get out."

Since April 1, over 200,000 people have fled their homes in the area around Raqqa, she said. The figure includes more than 30,000 displaced just this month as US-backed Syrian fighters try to oust the extremists.

Nisreen Abdullah, the Kurdish spokeswoman, told The Associated Press that the pace of the advance into Raqqa has slowed because of massive amounts of explosives laid by IS fighters.

As the extremists become more surrounded, they have increased their suicide attacks against fighters of the SDF, she added.