British family appeals for peace after man's death in custody 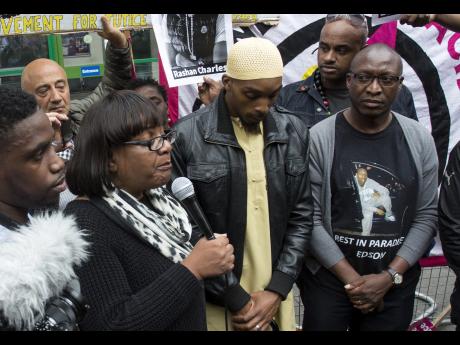 The family of a young black man who died following a London police chase appealed for peace yesterday, a day after street protests over his death turned violent.

Relatives held a vigil outside an East London police station for 20-year-old Rashan Charles, who died in a hospital last week after he was pursued and apprehended by an officer in the capital's Hackney area.

The Independent Police Complaints Commission is investigating the case and said it will consider whether any misconduct or crimes were involved.

Clashes broke out on the streets of East London late last Friday as riot police tried to disperse protesters, who hurled bottles and fireworks at officers, barricaded a road with garbage cans and mattresses, and later set the objects on fire. Some held "Black Lives Matter" placards.

Scotland Yard said the violence overnight was "separate" from a peaceful protest at a police station earlier Friday.

Police said the unrest resulted in damage to "vehicles, a cash machine and a number of windows." An officer was injured and a 17-year-old boy was arrested on suspicion of causing bodily harm.

"No justice, no peace, doesn't mean violence. It means we will not watch this in silence," Charles' family spokesman Stafford Scott told reporters.

Unverified footage on social media appeared to show at least one police officer attempting to restrain Charles on the floor of a shop.

The Charles family was joined by the family of Edson Da Costa, another black man who recently died after being detained by police. Supporters say Costa was beaten by police, and his June 21 death is also being investigated by the police complaints commission.