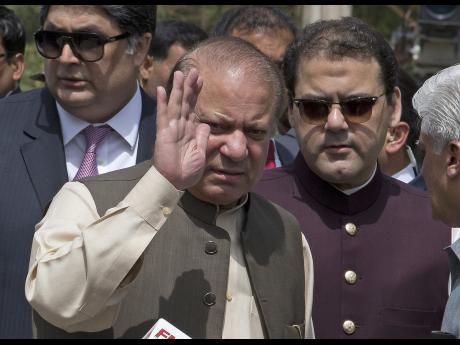 AP
In this Thursday, June 15, 2017, photo, Pakistani Prime Minister Nawaz Sharif waves with his son Hussain Nawaz, right, outside the premises of the Joint Investigation Team, in Islamabad, Pakistan.

Sharif proposed Abbasi as interim prime minister at the meeting of Pakistan Muslim League party in Islamabad. His request was endorsed by lawmakers from his party.

Because Sharif's party enjoys a comfortable majority in the parliament, his long time loyalist Abbasi is expected to easily win the required vote when National Assembly meets next week.

In a televised speech yesterday, Sharif said that his younger brother, Shahbaz, who currently is chief minister in Punjab province, would contest election to the National Assembly, in the seat which fell vacant with his removal.

In an emotional appeal, Sharif sought support for Shahbaz as a future full-time premier. Sharif said he tried his best to put Pakistan on the path of progress but was unfairly penalised with his disqualification.

"I was not expecting what happened to me yesterday," he said.

Sharif said he was removed by the Supreme Court on "baseless allegations."

He said the opposition had campaigned against him in recent years, accusing him and his family of indulging in alleged corruption. "My hands are clean and none of my family members misused government funds," he said.

It was his first public response to last Friday's court ruling.