Putin says US will have to shed 755 from diplomatic staff 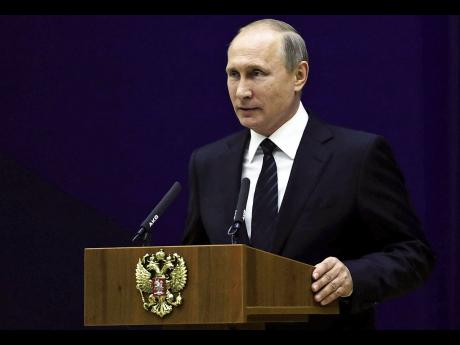 Russian President Vladimir Putin said Sunday the United States would have to cut its embassy and consulate staff in Russia by 755 under new sanctions from Moscow.

Russian's Foreign Ministry on Friday ordered a reduction by September 1 in the number of U.S. diplomatic personnel in Russia. It said it is ordering the U.S. Embassy to limit the number of embassy and consular employees in the country to 455 in response to the U.S. Senate's approval of a new package of sanctions.

"We had hoped that the situation will somehow change, but apparently if it changes, it won't be soon," Putin said in an interview televised on Rossiya 1, explaining why Moscow decided to retaliate. "I thought it was the time to show that we're not going to leave it without an answer."

Russia is open to cooperating with the U.S. on various issues, including terrorism and cybercrime, but instead it "only hears unfounded accusations of meddling in U.S. domestic affairs," he said.

Putin said more than 1,000 people are currently employed at the Moscow embassy and three U.S. consulates in Russia. They include both Americans and Russians hired to work in the diplomatic offices.