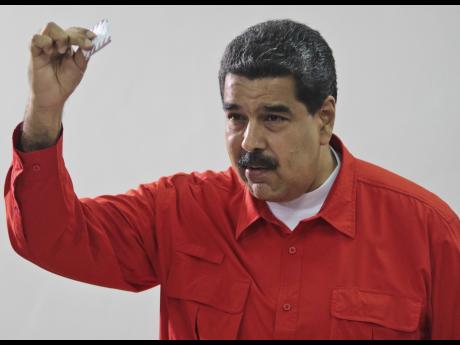 AP
In this photo released by Miraflores Press Office, Venezuela's President Nicolas Maduro shows his ballot after casting a vote for a constitutional assembly in Caracas, Venezuela on Sunday. Maduro asked for global acceptance on Sunday as he cast an unusual pre-dawn vote for an all-powerful constitutional assembly that his opponents fear he'll use to replace Venezuelan democracy with a single-party authoritarian system.

The number of Venezuelans who participated in the election for an all-powerful constituent assembly was inflated by at least one million votes in an official count, the head of a voting technology company asserted yesterday, a finding certain to sow further discord over the controversial super-body that has generated months of nationwide protests.

figure of more than eight million participants was manipulated.

The international software company has been providing electronic machines in Venezuela since 2004.

"Even in moments of deep political conflict and division, we have been satisfied with the voting process and the count has been completely accurate," Mugica told reporters in London. "It is, therefore, with the deepest regret that we have to report that the turnout figures on Sunday, 30 July, for the Constituent Assembly in Venezuela were tampered with."

The assembly will be granted vast powers to rewrite the nation's constitution and override every branch of the government.

Opposition members boycotted the election, claiming the terms to select delegates were heavily rigged to favour the ruling party. President Nicolas Maduro has vowed to use the assembly to target his enemies and solidify Venezuela as a socialist state.

An independent exit poll concluded that the turnout was less than half that reported by the election commission. Opposition leaders who stationed observers in every municipality also questioned the count.