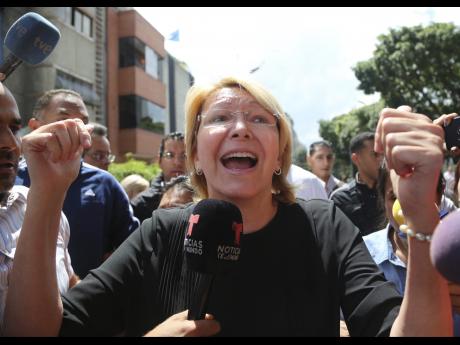 Cries of "traitor" and "justice has arrived" erupted from the 545 pro-government delegates during the unanimous vote to remove Luisa Ortega from her post as the nation's top law enforcement official and replace her with a staunch government supporter.

They said they were acting in response to a ruling by the government-stacked Supreme Court, which had also been considering a request to sanction Ortega.

Earlier yesterday, Ortega, a long time loyalist who broke with the socialist government in April, said she was pushed and barred from entering her office by dozens of national guardsmen in riot gear who took control of the entrance to the building.

She alleged that authorities were desperate to get their hands on sensitive dossiers containing information on dirty dealings by high-level officials, including details about millions of dollars in bribes paid by Brazilian construction giant Odebrecht.

"Do you know what they want to achieve with this? They want to hide the corruption and violation of human rights taking place in Venezuela that I will continue to denounce," Ortega told journalists outside the building.

Assembly delegates voted to replace her with Tarek William Saab, who was recently sanctioned by the Trump administration for failing to protect protesters from abuses in his role as the nation's top human rights official.

Members of the all-powerful constitutional assembly had pledged in their first meeting to move quickly against Maduro's opponents.

The constitutional assembly was seated despite strong criticism from the United States, other countries and the Venezuelan opposition, which fear the it will be a tool for imposing dictatorship.

"This is what the constitutional assembly will bring: more repression," opposition lawmaker Miguel Pizarro said.