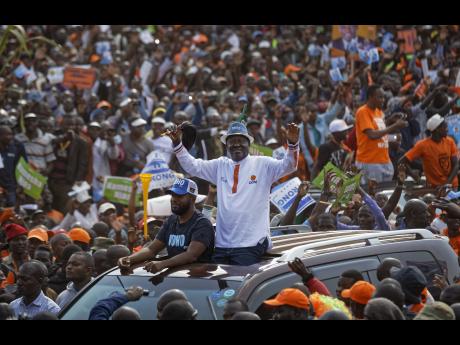 AP
Main opposition leader Raila Odinga greets the crowd through the sunroof of his vehicle as he arrives for his final electoral campaign rally at Uhuru Park in Nairobi, Kenya, yesterday.

A United States-based campaign data company confirmed yesterday that its CEO was detained in Kenya and faced deportation after working on the opposition's campaign ahead of Tuesday's tightly contested presidential election.

The detention of the CEO of Aristotle, Inc. raised further concerns about the vote just days after a top Kenyan election official responsible for the electronic voting system was found tortured and killed.

Travis said Phillips was at the US Embassy in Nairobi.

The two men were assisting opposition candidate Raila Odinga with issues including strategy and data analysis and had chosen to get involved in the Kenyan election because they thought it had the potential for irregularities, Travis told The Associated Press.

"We pick our international campaigns very carefully," Travis said. "Odinga was a candidate they really believed in."

Both Odinga and Kenyan President Uhuru Kenyatta were in their final day of campaigning yesterday as some in the East African nation worried that the vote could turn violent, as it did a decade ago.

Recent elections in the East African high-tech and commercial hub have been hotly contested, and more than 1,000 people were killed in post-election violence in 2007.

Some in the nation of 44 million people have been leaving the capital because of the threat of chaos, while many are simply going home to vote.