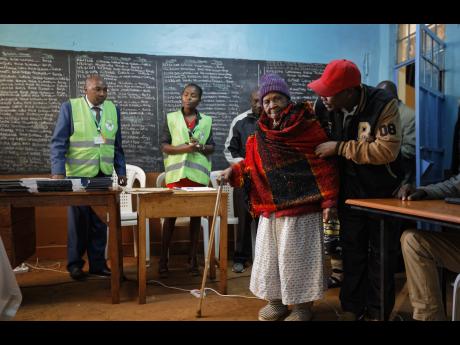 AP
Lydia Gathoni Kiingati, 102, walks to cast her vote just after dawn at a polling station in Gatundu, north of Nairobi, Kenya, yesterday. Kenyans are going to the polls to vote in a general election after a tightly-fought presidential race between incumbent President Uhuru Kenyatta and main opposition leader Raila Odinga. (AP)

Stooped but determined, a 102-year-old woman, believed to be one of Kenya's oldest citizens, cast her ballot in national elections yesterday.

"I have come here to vote because good leadership comes from God," Lydia Gathoni Kiingati said. "I want to vote because I believe God has kept me alive for so many years."

Kiingati, who wore a wool cap and walked with a cane to the ballot box, smiled broadly when an election official marked her finger with indelible ink after she voted. The procedure is a safeguard that prevents anyone from trying to vote more than once.

The veteran voter did her civic duty at a polling station set up in a primary school in Gatundu, north of Nairobi. The area is the birthplace of President Uhuru Kenyatta, who voted at the same place, urging Kenyans to return home and peacefully await the results.

Kiingati said she voted for Kenyatta, who seeks a second term and faces a fierce challenge from opposition leader Raila Odinga. The woman also referred with respect to Jomo Kenyatta, the president's father who was Kenya's first leader after independence from British colonial rule in 1963.

"She always votes and it's not the first time she is doing it, and she told us that since the day has come, we have to bring her here to vote because she is a proud Kenyan," Wambui said.