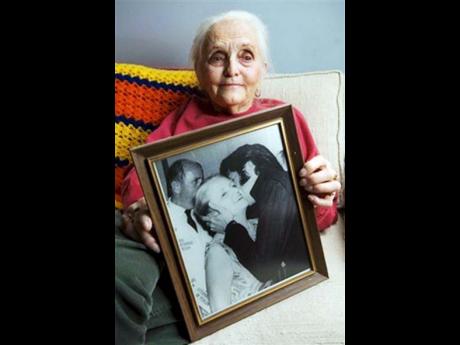 File
In this 2008 photo, Nancy Anderson, then 89, a former reporter and West Coast editor of Photoplay magazine, shows a photograph of her receiving a kiss from Elvis Presley.

It isn't just the legend of Elvis Presley that has unmatched staying power 40 years after his death. The guilt, pain and regret felt by those who knew and loved him lingers, too.

Prolific session musician and producer Norbert Putnam was on vacation with his family in Hawaii when he heard his friend died of a heart attack.

After years of making groundbreaking music and acting in more than two dozen movies, Presley's career had slowed, and historical accounts of his life note he was fighting obesity and substance abuse when he passed away in his Graceland home in Memphis, Tennessee.

Since Presley's death, devotees of the swivel-hipped, smooth talking performer who was born into poverty in Tupelo, Mississippi, and became an international star, have been flocking to Memphis for Elvis Week, the annual celebration of his life and career.

It coincides with the anniversary of Presley's death in Memphis on August 16, 1977, and it draws visitors from around the world.

Most fans will have their first glimpse of a newly built entertainment complex that has replaced and updated old exhibits focused on Presley's cars, movies and memorabilia.

An estimated 30,000 people are expected to attend a candlelight vigil that begins Tuesday night and continues into Wednesday morning at Graceland, where Presley is buried.