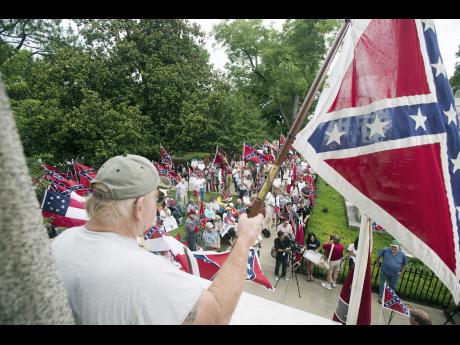 US President Donald Trump is facing criticism for his response to the violence at a white supremacist rally.

A woman was killed and 19 people injured when a car ploughed into a crowd of counter-protesters in Charlottesville, Virginia.

Mr Trump condemned violence by "many sides" - but stopped short of explicitly condemning the far-right.

The White House has since clarified in a statement that his condemnation included white supremacists.

"The president said very strongly in his statement yesterday that he condemns all forms of violence, bigotry and hatred. Of course that includes white supremacists, KKK, neo-Nazi and all extremist groups," a spokesperson said on Sunday.

Several senior Republican figures have voiced criticism of his comments, including Senator Cory Gardner, who said "Mr President - we must call evil by its name."

He added: "These were white supremacists and this was domestic terrorism."

Hundreds of white nationalists converged for Saturday's "Unite the Right" march, called to protest against the removal of a statue of a general who had fought for the pro-slavery Confederacy during the US Civil War.

The far-right demonstrators, who included neo-Nazis and Ku Klux Klan members, clashed with counter-protesters. People punched and kicked each other, and pepper spray, used by both sides, filled the air.

As the rally was dispersed, a car was driven into a crowd of counter-protesters, the force of the crash flinging people into the air.

Twenty-year-old James Fields from Ohio, the alleged driver, is in detention on suspicion of second-degree murder and the FBI has opened a civil rights investigation.

Apart from the car-ramming incident, Charlottesville police said at least 15 were wounded in other violence related to the far-right march.

The governor of Virginia, Terry McAuliffe, said that his only message for the white supremacists who had come to Charlottesville was "Go home".