12 killed when huge tree crashes down on Portuguese festival 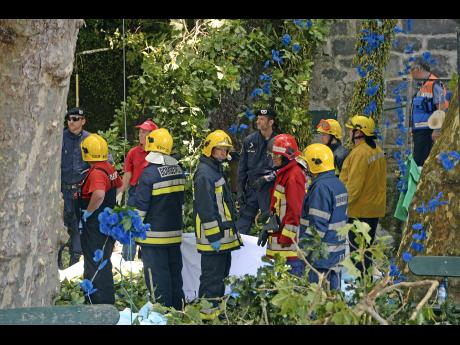 ASPress
Firefighters hold a blanket as bodies are removed from the scene where a tree fell on a large crowd on the outskirts of Funchal, the capital of Madeira island, Portugal, yesterday.

A huge tree crashed down on a popular religious festival on the Portuguese island of Madeira yesterday, killing 12 people and injuring 52 others, officials said.

The tree fell while a large crowd was gathered near the island's capital of Funchal as part of the Nossa Senhora do Monte festival. It's Madeira's biggest annual festivity and was being held on Monday and Tuesday, drawing large crowds to a church on Funchal's outskirts.

Local media reports described the tree as an oak more than 200 years old. Regional authorities say they are investigating what caused it to come crashing down.

Regional health chief Pedro Ramos said seven people had sustained serious injuries. Ramos said that of the 12 fatalities, 10 people died at the site of the accident. A child died en route to a local hospital, where a woman later died.

Miguel Albuquerque, the head of the regional government of Madeira, declared three days of mourning for the victims.

"I express my condolences for the victims of the accident in Madeira," Costa said. "My thoughts are with the family and friends of the victims."

Costa said that the central government made contact with local authorities on the island to offer its support.

"The government has provided medical support given the high number of victims," he said.

Portuguese President Marcelo Rebelo de Sousa said he would travel to the island.

"I will go to Funchal today to learn more about what has happened, and, of course, to bring words of encouragement and comfort to those who have lost their loved ones," he said in a message posted on the president's official website.